Not even cell death can stop the alarm 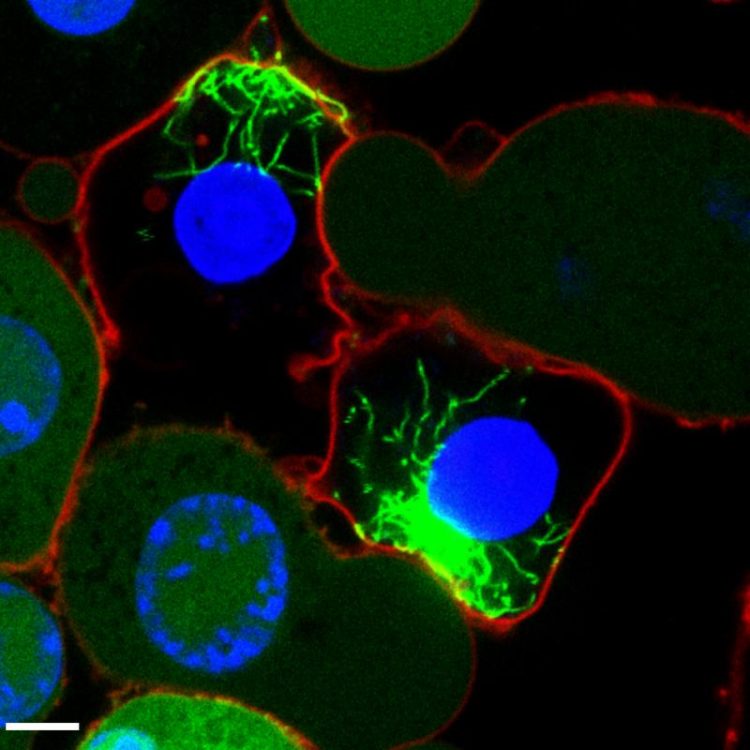 An international team of researchers under the direction of scientists from the Institute of Innate Immunity at the University Hospital of Bonn has discovered how this incredible form of communication works.

The findings offer potentially novel approaches for therapies against many serious diseases that affect a large part of the population, such as gout, atherosclerosis and Alzheimer's disease. The exciting new results are now published in the renowned journal “Nature Immunology”.

When there is stress in living immune cells, – for example due to the detection of microbes, or the deposition of uric acid crystals in joints, cholesterol in blood vessels or Alzheimer's plaques in the brain – the so-called ‘inflammasome’ sounds the alarm. Inflammasomes are large multiprotein complexes, which form when they sense cell stress.

The inflammasomes activate an enzyme, which stimulates important messengers that in turn trigger an inflammatory reaction. During this cell activation, the affected immune cells die and thus the inflammatory reaction should come to a halt. “This mechanism primarily protects the body from infections and harmful influences,” says Prof. Eicke Latz, the director of the Institute of Innate Immunity at the University Hospital in Bonn.

Strikingly, these new findings reveal that inflammasomes remain active even when the cells have died. The scientists were able to demonstrate that activated inflammasomes also have enzymatic functions outside of the living cell and can thus activate additional messengers. In a type of chain reaction, the inflammasomes released from dying cells are taken up by neighboring immune cells where they can activate more inflammasomes.

When the inflammasomes are switched on, within seconds they form functional protein complexes, which can be as large as a bacterium. “In the event of stress or infection, this protein complex forms and provokes the activation of pro-inflammatory messengers within the cell and – as we now know – this can also occur outside of the cell. In this way, there can be a very rapid inflammatory reaction which helps the undesired insult or microbial invaders to be eliminated as quickly as possible,” explains lead author Dr. Bernardo S. Franklin, a fellow of the Alexander von Humboldt Foundation working in Prof. Latz's team.

Using fluorescence techniques, the researchers labeled the inflammasome in immune cells. Whenever it was active, it formed a fluorescent protein complex, reminiscent of small stars glowing inside the cell. Using this method, the scientists were able to track the inflammasome after cell death, and show that it remained switched on as an intact protein complex. They also found that once released from the dead cell, it stimulated neighboring cells to undergo an inflammatory reaction. Furthermore, they found that these extracellular complexes accumulate in the lungs of patients with chronic lung disease.

“Normally, the immune system is very helpful for averting harmful damage to tissue by initiating an inflammatory reaction,” says Prof. Latz. However, if such inflammatory reactions are excessive or if they persist for longer than necessary, this may contribute to common diseases of Western society, such as gout, Alzheimer's disease, diabetes or atherosclerosis. With the discovery of extracellular inflammasomes, the researchers have revealed an interesting avenue for potential new therapies: “If we are able to produce suitable antibodies, it is likely we could contain the alarm of the inflammasome outside of cells and thus keep harmful chronic inflammatory reactions at bay, without affecting the necessary response inside the cell” says Prof. Latz.