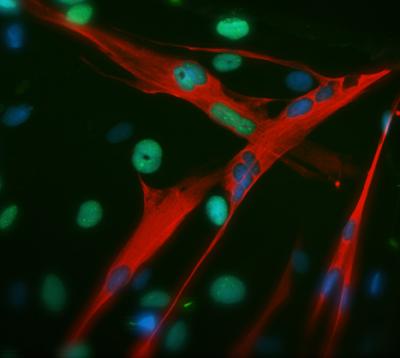 For the first time, researchers have found that the 'ERK pathway' must be constantly active for salamander cells to be reprogrammed, and hence able to contribute to the regeneration of different body parts.

The team identified a key difference between the activity of this pathway in salamanders and mammals, which helps us to understand why humans can't regrow limbs and sheds light on how regeneration of human cells can be improved.

The study published in Stem Cell Reports today, demonstrates that the ERK pathway is not fully active in mammalian cells, but when forced to be constantly active, gives the cells more potential for reprogramming and regeneration. This could help researchers better understand diseases and design new therapies.

Lead researcher on the study, Dr Max Yun (UCL Institute of Structural and Molecular Biology) said: “While humans have limited regenerative abilities, other organisms, such as the salamander, are able to regenerate an impressive repertoire of complex structures including parts of their hearts, eyes, spinal cord, tails, and they are the only adult vertebrates able to regenerate full limbs.

We're thrilled to have found a critical molecular pathway, the ERK pathway, that determines whether an adult cell is able to be reprogrammed and help the regeneration processes. Manipulating this mechanism could contribute to therapies directed at enhancing regenerative potential of human cells.”

The ERK pathway is a way for proteins to communicate a signal from the surface of a cell to the nucleus which contains the cell's genetic material. Further research will focus on understanding how this important pathway is regulated during limb regeneration, and which other molecules are involved in the process.