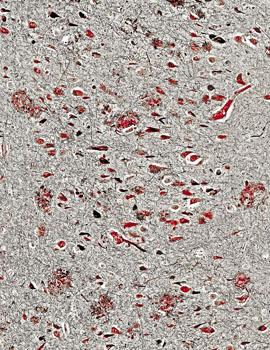 This is a micrograph of amyloid plaques and neurofibrillary tangles in human brain. Credit: Thomas Deerinck/National Center for Microscopy and Imaging Research at UC San Diego

The amyloid cascade hypothesis of Alzheimer's disease (AD) posits that sticky aggregations or plaques of amyloid-beta peptides accumulate over time in the brain, triggering a series of events that ultimately result in the full-blown neurodegenerative disorder. The hypothesis has been a major driver of AD research for more than 20 years.

However, in a new study published this week online in the Journal of Alzheimer's Disease, researchers at University of California, San Diego School of Medicine and Veterans Affairs San Diego Healthcare System suggest the picture is not so clear-cut, reporting that early indicators or biomarkers of AD development are not fixed in a specific sequence.

“Our current ability to identify early stages of AD is limited by the focus on amyloid accumulation and the expectation that biomarkers follow the same timeline for all individuals,” said Emily C. Edmonds, PhD, a senior postdoctoral fellow in the Department of Psychiatry and first author of the study.

But, Edmonds said, “AD is complex in the sense that there may be different neurobiological pathways leading to expression of the disease. Our findings suggest that the number of abnormal biomarkers and cognitive markers an individual possesses, without regard to the temporal sequence, is most predictive of future decline.”

“Preclinical AD” is a very early stage of AD prior to the appearance of diagnosable symptoms. Current National Institute of Aging-Alzheimer's Association (NIA-AA) criteria for preclinical AD describe a disease progression that begins with accumulation of amyloid-beta, leading to neurodegeneration, cognitive decline and, eventually, diagnosable AD.

In their study, researchers classified 570 cognitively normal participants in the Alzheimer's Disease Neuroimaging Initiative according to NIA-AA criteria, and then separately examined the participants based upon the presence and number of abnormal biological and cognitive markers associated with preclinical AD. They found that neurodegeneration alone was 2.5 times more common than amyloid accumulation alone at baseline measurements.

Edmonds said that the findings underscore the need to improve identification of persons at risk for AD through the use of multiple, diverse assessment tools. This includes sensitive learning and memory tests capable of reliably identifying cognitive changes at the earliest stages.

“At present, it is much more common for assessment of cognition to be based on insensitive screening measures or reports of cognitive problems by patients or their family members,” said Edmonds. “These blunt screening tools can be very unreliable, which might explain why cognitive decline has traditionally been viewed as occurring later in the disease process. The integration of sensitive neuropsychological measures with assessment of biomarkers of AD can enhance our ability to more accurately identify individuals who are at risk for future progression to AD.”