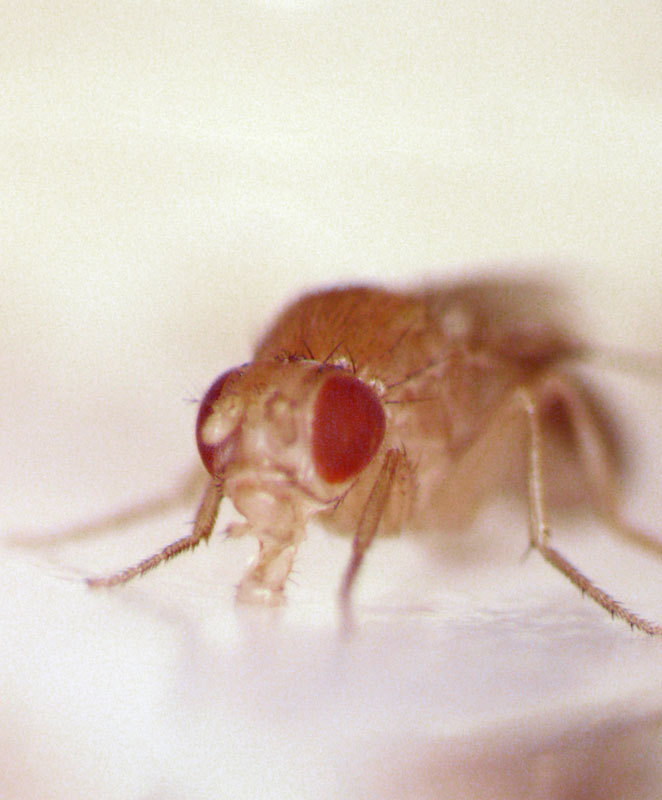 Humans, yeasts and fruit flies began to evolve separately millions of years ago. Nevertheless, the cellular processes which regulate cell division and cell death – and therefore the mechanism of ageing – are similar in all of them. Scientists at the Max Planck Institute for Biology of Ageing in Cologne and University College London have now succeeded in controlling this mechanism, thus extending life expectancy in fruit flies by around twelve percent.

They achieved this with the help of a cancer drug called Trametinib. Human cells contain the same molecular switches that Trametinib targets in fruit flies. It is therefore conceivable that the substance could be used to develop future anti-ageing drugs to extend life expectancy in humans.

To ensure a long and healthy life in humans, researchers have to understand the ageing process at the cellular level more precisely. A scientific study has now shown how Ras proteins can be manipulated to prolong the lifespans of animals.

Ras proteins play a key role in the regulation of cell processes. As molecular switches within the cellular signalling network, they control vital functions such as cell division, cell death, specialisation and metabolism. They regulate these intracellular processes via the Ras-Erk-ETS signal pathway. This network has been conserved over hundreds of millions of years of evolution and is present in single-cell organisms such as yeasts, in insects such as the fruit fly (Drosophila), as well as in mammals such as mice and humans.

It was already known that inhibition of this signal pathway can prolong the life expectancy of yeast cells. However, to achieve this, the scientists had thus far manipulated the DNA directly in order to deactivate individual genes and with them the Ras signal pathway. However, no substance was known that could slow the ageing process at this interface. Recent work by the research team has now filled this gap.

The scientists took advantage of the fact that the Ras-Erk-ETS signal pathway has been thoroughly researched in the context of cancer treatment. This is because overactivation of Ras is carcinogenic: in around a third of cancer patients, the Ras proteins of cancer cells are mutated, resulting in uncontrolled cellular division. Many cancer researchers have therefore focussed on this signal pathway – and the first drugs have already been developed to interfere with Ras signalling in order to check cancerous growth.

The researchers administered one of those substances, Trametinib, to fruit flies in the form of a food additive. Even a small dose, which is approximately equivalent to a daily dose of the drug in a human patient, increased the fruit flies’ average life expectancy by eight percent. With a moderate dose, the flies lived twelve percent longer on average.

Any drug suitable for anti-ageing applications must be effective even if it is administered during an advanced phase of life. The scientists successfully demonstrated this property. In a substudy, they administered the substance for the first time to Drosophila that were 30 days old – a ripe old age for this species. At this point, egg laying, i.e. the insects’ fertile phase, has ceased. Even when a moderate dose of the substance was given to the flies at this late point in their lifespan, it still increased their average life expectancy by seven percent. The researchers observed no adverse effects on the insects’ digestive system or food intake.

“Our findings indicate what substance classes could be used to slow the ageing process in humans,” explains Nazif Alic of University College London. “The Ras-Erk-ETS signal pathway could serve as a target for those substances.” The aim now is to investigate this pathway more closely. “The study suggests that inhibition of this signal pathway has positive effects on longevity and mortality,” says Cathy Slack, who researches at University College London and at the Max Planck Institute for Biology of Ageing. Slack emphasises that Trametinib has been approved by the FDA as a drug for the treatment of skin cancer and is therefore already in clinical use.

In mammals, Ras acts as a mediator for the insulin/IGF-1 signal pathway, which modulates life expectancy. Ras activation has effects on both the PI3/Akt and Erk/Mapk signal pathways. Until now, it was assumed that the PI3/Akt branch is primarily responsible for modulating lifespan. The findings show, however, that the Erk branch is also important in this regard. Two transcription factors controlled by Ras-Erk appear to be key mediators of these effects: Pnt, a gene expression activator, and Aop, a repressor. It therefore appears likely that life expectancy can be regulated via both branches of the signal pathway.