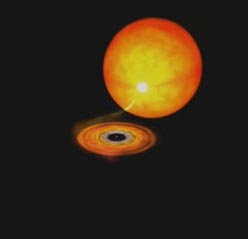 This animation illustrates how an old pulsar in a binary system can be reactivated -- and sped up to a millisecond spin -- by accreting gas from its companion star. Image Credit: NASA<br><br>Feature Link: <br>Download this video in HD formats from NASA Goddard's Scientific Visualization Studio<br>http://svs.gsfc.nasa.gov/vis/a010000/a010100/a010144/<br>

In a feat that has never before been observed, the star readily shifts back and forth between two mutually exclusive styles of pulsed emission — one in X-rays, the other in radio.

The discovery, say scientists, represents a long-sought intermediate phase in the life of these powerful objects.

“This transitional object took us decades to find, and it provides us with a unique opportunity to observe a pulsar's intense magnetic field in action,” said Sergio Campana, an astronomer at Brera Observatory in Merate, Italy, and a co-author of a paper on the object that appears in the Sept. 26 issue of the journal Nature.

What flips the switch from X-rays to radio and back is the rise and fall of gas streaming onto the pulsar from a normal companion star.

A pulsar is a magnetized neutron star that emits regular pulses of light. A neutron star is the closest thing to a black hole that astronomers can observe directly, compressing half a million times Earth's mass into a ball no larger than a city. Once the core of a massive star that exploded as a supernova, a neutron star is so dense that a teaspoonful weighs as much as a mountain.

Millisecond pulsars combine incredible density and powerful magnetic fields with extreme rotation. The fastest one known whirls at 43,000 revolutions per minute. Astronomers think they achieve such speeds because these pulsars reside in binary systems with normal stars.

During part of their stellar lives, gas flows from the normal star and falls onto the neutron star, heating to millions of degrees and emitting X-rays in the process. The pulsar's magnetic field directs the infalling gas onto its magnetic poles, producing hot spots that rotate with the neutron star and give rise to regular X-ray pulses.

The gas rains onto the pulsar's surface with incredible force, producing X-rays in the process, and ultimately coats the neutron star in a layer of hydrogen and helium fuel. When this layer reaches a certain depth, the fuel undergoes a runaway thermonuclear reaction and explodes, creating intense X-ray bursts. Over time, the gas stream also gradually speeds up the pulsar's rotation.

After about a billion years, the gas flow from the normal star declines and eventually stops, putting an end to X-ray pulses powered by the accretion of gas. But thanks to its increased spin and intense magnetic field, which together produce radio emission, the neutron star could continue operating as a radio pulsar.

On March 28, the European Space Agency's (ESA) International Gamma-Ray Astrophysics Laboratory detected a flash of X-rays from a previously unknown source. This object, dubbed IGR J18245-2452, was observed by Swift's X-Ray Telescope (XRT) the following day, resulting in a more precise position. This enabled astronomers to place the source at the core of the globular star cluster M28, which is located about 18,000 light-years away toward the constellation Sagittarius.

“Swift provided the first accurate, subarcminute localization of the X-ray burst, which allowed for the additional discovery of the pulsar's radio waves by the Australia Telescope Compact Array (ATCA),” said Jamie Kennea, a Swift team member at Penn State.

A week after the discovery, a team led by Alessandro Papitto of the Institute of Space Sciences in Barcelona, Spain, directed ESA's XMM-Newton satellite toward the object. It detected X-ray pulses, which indicated a neutron star spinning once every 3.9 milliseconds or at about 15,000 rpm. By analyzing changes in the arrival times of these pulses, the scientists established that the pulsar was joined by a small companion star less than one-fifth the mass of our sun. The two stars orbit each other every 11 hours.

On April 5, the team detected variable radio emission with ATCA, but then, two days later, the object fired off an intense burst of X-rays carrying the tell-tale signature of a thermonuclear explosion on the surface of a neutron star.

“Swift's Burst Alert Telescope was dynamically triggered by X-ray bursts from this star, which allowed its XRT to rapidly confirm the thermonuclear character of this explosion,” said John Nousek, professor of astronomy and astrophysics and director of the Swift Mission Operations Center at Penn State, which controls the spacecraft's science and flight operations.

With the pulsar's spin and orbital characteristics in hand, a team led by Alessandro Papitto of the Institute of Space Sciences in Barcelona, Spain, compared them to parameters for known radio pulsars in M28 and found a perfect match with PSR J1824-2452I.

Within weeks, the same pulsar showed clear evidence of accretion-powered X-ray emissions, as indicated by thermonuclear explosions, and rotation-powered signals at radio wavelengths. What was going on?

Papitto and his team think the answer lies in the interplay between the pulsar's magnetic field and variations in the gas flow from the companion.

During periods when the mass flow is less intense, the magnetic field sweeps away the gas and prevents it from reaching the surface and creating X-ray emission. With the region around the neutron star relatively gas free, radio signals can easily escape and astronomers detect a radio pulsar.

“At high mass flow rates, the gas squeezes the magnetic field and is able to reach the surface to produce X-ray emission. At the same time, the dense cloud of ionized gas surrounding the pulsar quenches the radio signals, effectively blocking them from our view,” Papitto explained.

Astronomers had expected these kinds of changes to occur on million-year timescales. But thanks to an international fleet of space-borne telescopes and support from many observatories on the ground, scientists now have uncovered the truth of IGR J18245-2452, the amazing quick-change artist among pulsars.