CBD may protect against psychiatric risk from high-THC cannabis strains 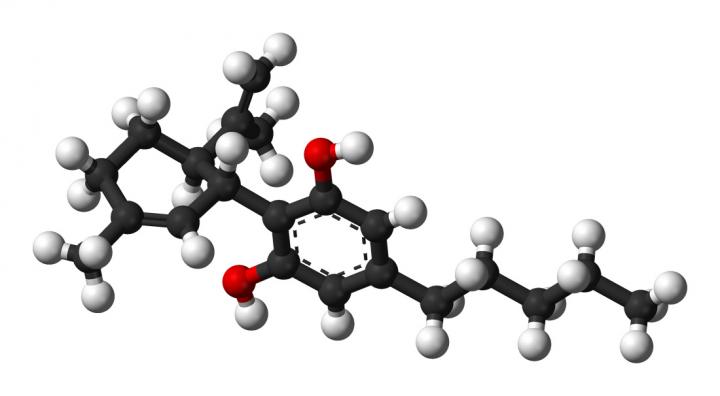 A model of the cannabidiol molecule, a non-psychoactive ingrediant in cannabis. Credit: Ben Mills

A study reported Sept. 5 by neuroscientists at Indiana University finds that a non-psychoactive compound in cannabis called cannabidiol, or CBD, appears to protect against the long-term negative psychiatric effects of THC, the primary psychoactive ingredient in cannabis.

Other research has shown that long-term use of cannabis increases adolescent drug users' risk for certain psychiatric and neurological disorders, such as schizophrenia. The risk to teens is greater than ever since selective breeding of plants to produce higher levels of THC over the past several decades has substantially increased exposure to the compound.

“This study confirms in an animal model that high-THC cannabis use by adolescents may have long-lasting behavioral effects,” said lead author Dr. Ken Mackie, professor in the IU College of Arts and Sciences' Department of Psychological and Brain Sciences and director of the Linda and Jack Gill Center for Biomolecular Science at IU Bloomington. “It also suggests that strains of cannabis with similar levels of CBD and THC would pose significantly less long-term risk due to CBD's protective effect against THC.”

THC, or tetrahydrocannabinol, is the chemical in cannabis that causes the “high” experienced during its use. Cannabis with higher levels of THC possess lower levels of the protective CBD, and vice versa, due to a biological link between THC and CBD production in the plant. An analysis of cannabis seized by the U.S. Drug Enforcement Administration found that while THC levels rose 300 percent from 1995 to 2014, the levels of CBD have declined 60 percent.

In contrast to THC, CBD does not cause a “high.” It is also an important ingredient in medical cannabis. For example, CBD appears useful as a treatment for some forms of severe childhood epilepsy, and its use for severe epilepsy was approved by the Indiana legislature this year.

“This is the first study in a rigorously controlled animal model to find that CBD appears to protect the brain against the negative effects of chronic THC,” Mackie said. “This is especially important since heavy use of cannabis with higher levels of THC poses a serious risk to adolescents.”

To conduct their study, IU researchers divided adolescent or adult male mice into five groups. Three groups received 3 milligrams per kilogram of body weight of either THC, CBD, or THC with CBD every day for three weeks. The other two groups received a placebo or no treatment.

All mice were then tested for signs of impaired memory, obsessive-compulsive behaviors and anxiety immediately following treatment as well as six weeks after treatment.

The mice exposed to THC alone showed signs of impaired memory and increased obsessive-compulsive behavior immediately after treatment. The adolescent group still experienced these changes six weeks after treatment, whereas the adult group did not. Both groups experienced a long-term increase in anxiety.

By contrast, adult and adolescent mice exposed to CBD alone showed no behavioral changes immediately or six weeks after treatment. Most significantly, mice in both age groups that received CBD with THC exhibited no short- or long-term behavioral changes. These results suggest that long-term use of cannabis strains containing similar amounts of CBD and THC may be less harmful than long-term use of high-THC strains.

The first author on the IU study is Michelle Murphy, a Ph.D. student in the IU Bloomington Program in Neuroscience and Department of Counseling and Educational Psychology in the IU School of Education. Additional authors are associate professor Heather Bradshaw and research scientist Jim Wager-Miller in the Department of Psychological and Brain Sciences and in the Gill Center for Biomolecular Science and Program in Neuroscience; Emma Leishman, Ph.D. student in the Program for Neuroscience; and Joanna Winstone and Sierra Mills, undergraduate students in the Department of Psychological and Brain Sciences.