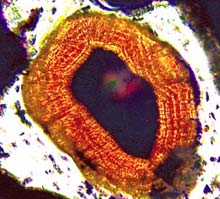 CSIRO research has found unusual properties in ilmenite sand from the Murray Basin that could be harnessed to remove heavy metal and radioactive pollution from mine drainage, industrial waste streams, and ground water.

CSIRO scientists discovered the sand grains contains tiny holes, just nanometres across, but just the right size to potentially capture and filter out toxic pollutants from mining and other industrial wastes, as well as catalyse important industrial processes.

But it was the ilmenite grains’ unusual physical properties that captured Dr Grey’s interest. “The weathering has created nanoscale porosity in the sand grains,” says Dr Grey. “This means the grains may act like molecular sieves, selectively adsorbing a variety of different chemicals within the nanopores.”

“Normally we process such sands to produce products such as titania pigment feedstocks and titanium metal, but the Murray Basin sands may have opened the door to new ways to prevent pollution reaching the environment and to clean up environments already polluted,” he says.

Nanoporous silicate materials became a commercial reality in 1992, and in recent years considerable effort has gone into attempts to synthesise nanoporous titanates. However, substantial obstacles to commercialisation remain, including high cost of reactants and lack of thermal stability.

“The weathered mineral sands have a number of natural advantages over the synthetic versions,” says Dr Grey, “They are mechanically strong and thermally stable to relatively high temperatures. And they exist naturally – hey provide a value-dded product with minimal processing required.”

The Murray Basin’s vast mineral sands deposits – rich in the economic minerals ilmenite, rutile and zircon – were formed along ancient coastlines, where the heavier minerals were concentrated by wave and wind action. Over millions of years, sea, sun and air have weathered these sands and changed their physical and chemical structures.

Dr Grey is continuing to characterise these ancient weathered sands in order to further determine the potential applications of Murray Basin minerals sands. He plans to apply this knowledge to develop and test procedures for industrial uses of these natural minerals, and to aid the design of procedures for synthesising equivalent materials.

Dr Grey is one of two CSIRO scientists to be presented with ATSE Clunies Ross Awards tonight in Melbourne.

The other CSIRO winner is Dr Rob Evans of CSIRO Forestry and Forest Products who will receive an award for his research into the development of a wood imaging system.