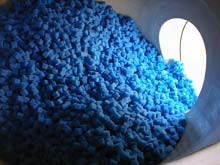 Scientists at UC Riverside have pushed the current limit of a technique for biologically removing hydrogen sulfide from sewage emissions a step further. Marc Deshusses, associate professor in the department of chemical and environmental engineering, and his postdoctoral researcher, David Gabriel, report in the Proceedings of the National Academy of Sciences (PNAS) that they have modified an existing full-scale chemical scrubber at the Orange County Sanitation District (OCSD), California, to a biological trickling filter.

“Hydrogen sulfide odors, which have the smell of rotten eggs, can be treated in biological reactors called biotrickling filters at rates similar to those observed in chemical scrubbers,” said Deshusses. “Biotreatment is cheaper, safer, and more environmentally friendly. In our paper, we also show that you can convert existing chemical scrubbers to biological trickling filters quite easily.”

Chemical scrubbing suffers from important drawbacks, such as high operating costs, generation of halomethanes that are known air toxics, and the requirement for hazardous chemicals, which pose serious health and safety concerns.

In biological trickling filters or biotrickling filters, the waste air stream is passed through a packed bed on which pollutant-degrading bacteria are placed in the form of a biofilm. These bacteria absorb and degrade gaseous pollutants. After the bacteria begin to multiply, their efficiency at converting hydrogen sulfide to sulfate is nearly 100 percent. Moreover, the system removes more odorant chemicals, including other sulfur and nitrogen compounds.

“We did extensive research in the laboratory prior to and during the field demonstration at OCSD in an attempt to explain why we obtained such a high performance from the biotrickling filter,” said Deshusses.

The UC Riverside researchers packed polyurethane foam cubes inoculated with hydrogen sulfide-degrading bacteria into the OCSD scrubber. They also replaced the existing liquid pump with a smaller one, disconnected the chemical supply system, and modified the control systems.

Emission of objectionable odors is a major problem for wastewater treatment and other processing facilities. For odor control, biological treatment is a promising alternative to conventional control methods, but so far biotreatment always required significantly larger reactor volumes than chemical scrubbers.

In the PNAS paper, the researchers report that effective treatment of hydrogen sulfide in the converted scrubber was possible even at gas contact times as low as 1.6 seconds, comparable to usual contact times in chemical scrubbers.

“Continuous operation of the converted scrubber for more than 8 months showed stable performances and robust behavior for hydrogen sulfide treatment, with pollutant removal performance comparable to that achieved using a chemical scrubber,” said Deshusses. “Our study demonstrates that biotrickling filters can replace chemical scrubbers and be a safer, more economical technique for odor control.”

An estimated 10,000-40,000 scrubbers for odor control operate at publicly owned treatment works in the United States and probably more than 100,000 scrubbers worldwide. “Many of those scrubbers treat hydrogen sulfide only,” said Deshusses, “hence, based on the results of our study, they could potentially be converted to biotrickling filters.”

An overall cost-benefit analysis of the scrubber that was converted at OCSD shows that total annual savings in operating costs (essentially chemicals and electricity) are about $30,000 per year for the biotrickling filter compared to chemical scrubbing. The estimated commercial cost of converting the chemical scrubber to a biotrickling filter was about $40,000-60,000, which compares well with the annual savings in operating costs.

“If one assumes that 25 to 40 percent of the chemical scrubbers worldwide could be converted to biotrickling filters,” said Deshusses, “it would represent a total market of $1-3 billion and would result in net energy and chemical savings of approximately $0.25-2 billion per year.”

The study was performed during 2001-2002 and is still on-going. Research was funded by OCSD.

The University of California, Riverside is home to some of the best scientists and engineers in the world in addition to its world-class research centers. The Bourns College of Engineering is well known for its research in embedded systems and networking in computer science, for environmental sciences (e.g., low emission vehicles, air pollution research), nanotechnology and research in intelligent systems.