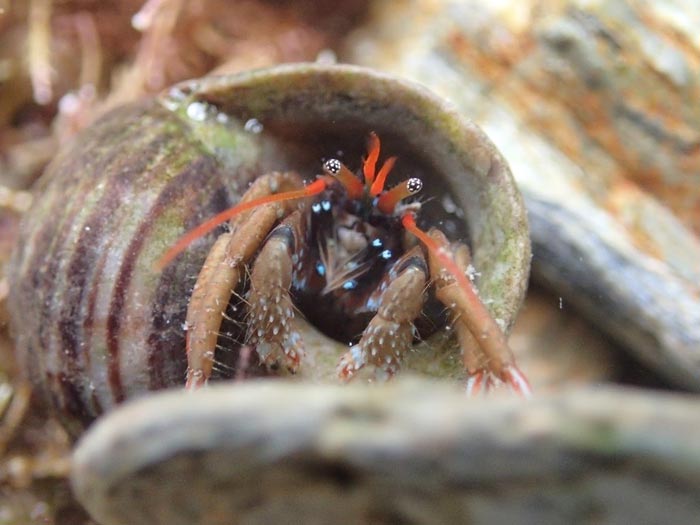 The English Channel prevents many rockpool species “making the jump” from Europe to the UK, new research shows.

With sea temperatures expected to rise due to climate change, many rockpool species in south-west England are threatened.

Creatures from warmer waters to the south could replace them – but the study, by the University of Exeter, suggests Channel currents mean many animals and plants cannot survive the crossing.

The study focussed on the St Piran’s hermit crab, which appeared in Cornwall in 2016 and was named by viewers of BBC Springwatch.

“The crab larvae almost certainly came from Brittany in northern France,” said Christophe Patterson, of the Centre for Ecology and Conservation on Exeter’s Penryn Campus in Cornwall.

“We modelled how ocean currents could carry larvae from Brittany to the south-west UK, and we found very few opportunities for this to happen.

“Only once in every ten years would the currents be suitable for the tiny St Piran’s crab larvae to cross the Channel.

“Even on these currents, the time it takes for larvae to be carried to the UK is much longer than most other species’ larvae can survive.

“Crabs and other crustaceans have the best chance, as many have larvae that could survive the crossing, but other groups like sea snails, sponges and seaweed just don’t live for long enough in open water to get here.”

Over the last 60 years, the sea temperature of the south-west UK has fluctuated. Despite a slight decline in recent years, average temperatures are expected to increase.

“Our research suggests that, as species die out, they will not be replaced by warmer-water species moving northwards, and the richness of intertidal wildlife in the UK will decrease,” said Dr Regan Early, also from the University of Exeter.

“Rockpool animals are not alone in this quest.

“As the world warms, many species will find themselves living in environments that are too hot for them to survive.

“To avoid extinction, species must move to new areas, keeping them within their preferred climate.

“However, physical barriers like the English Channel may prevent species from doing this.”

The study was carried out by Exeter’s FABiogeography research group.

The paper, published in the journal Marine Biology, is entitled: “The range expansion of Clibanarius erythropus to the UK suggests that other range-shifting intertidal species may not follow.”