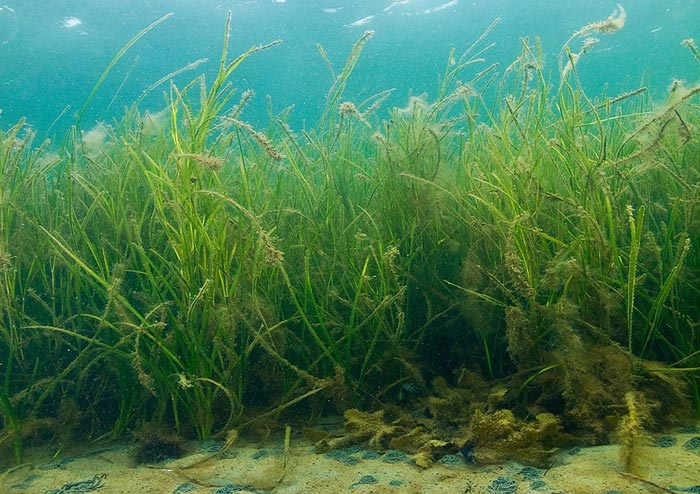 The genetic history of eelgrass may play a greater role than the local present-day environment for how tall the eelgrass can become and for how many other plants and animals will live within the eelgrass meadow. These findings were shown in a large survey that included researchers from the University of Gothenburg. Eelgrass in the Atlantic Ocean has less genetic variation compared with eelgrass meadows in the Pacific and may have a harder time to adapt and survive under climate change causing rapid changes in the marine environment.

Eelgrass grows along coast lines in the northern hemisphere in both the Pacific and Atlantic Oceans. This key species forms large meadows on the sea floor that can store carbon dioxide and serve as an important nursery for many species. Pacific Ocean eelgrass can grow to 3–4 metres high while it is generally shorter in the Atlantic.

“We used to think it was mainly the local marine environment that determines how eelgrass grows and what plants and animals are found there, but this study shows that, instead, it depends largely on the genetic history of the eelgrass,” says Marlene Jahnke, a conservation biology researcher at the University of Gothenburg.

An immigrant from the Pacific Ocean

Eelgrass evolved in the Pacific Ocean. During a warmer period on Earth, the species migrated to the Atlantic Ocean via the Arctic. Only a few variations of eelgrass survived the harsh conditions of the Arctic, and a number of subsequent ice ages further decreased the genetic diversity of Atlantic eelgrass. The genetic differences between the two oceans affects – among other things – how tall the eelgrass can grow.

“We call this genetic bottlenecks. There have been periods in which much of the eelgrass in the Atlantic simply died and only a few of the varieties survived. Even today – half a million years after migrating to the Atlantic, eelgrass in the Atlantic Ocean has less genetic diversity, which can make the species more vulnerable in the face of changes to salinity or temperature, for example. With more genetic varieties in the same population, chances are greater for a given population to handle the changes and survive,” says Marlene Jahnke.

Together with fellow researchers Per-Olav Moksnes from the University of Gothenburg and Johan Eklöf from Stockholm University, Marlene Jahnke has collected seagrass samples from two separate locations in Gullmarsfjorden. The DNA of the samples was analysed and compared to 48 other meadows in both the Atlantic and Pacific Oceans. This collaboration among researchers from many different countries in the northern hemisphere began 15 years ago and the researchers have now established that genetic history trumps the environment when it comes to eelgrass characteristics in different locations. This finding was recently published in the scientific journal PNAS, Proceedings of the National Academy of Sciences.

Eelgrass is important for the ecosystem

“Eelgrass is an incredibly important plant for the coastal ecosystems of oceans in the northern hemisphere. If eelgrass does not manage to adapt to new conditions, it isn’t just the eelgrass that dies. This has consequences for many other species that live in eelgrass meadows, and for the vast quantities of carbon and nutrients stored in the sediment. We believe that eelgrass in the Pacific Ocean is better equipped to adapt because it has greater genetic diversity,” says Per-Olav Moksnes, marine ecology researcher at the University of Gothenburg.

In an ongoing project at the Tjärnö Marine Laboratory eelgrass from Sweden’s west coast is exposed to an artificial heat wave. The idea is to see if simplified eelgrass communities with greater genetic diversity can better handle the heat wave.

“In cooperation with government agencies, we’ve started temporal genetic monitoring of eelgrass along our entire coast. Our study indicates the importance of retaining significant genetic diversity, and in Sweden, government agencies are taking this into consideration, which is unique,” says Marlene Jahnke.

Eelgrass is a seagrass that forms underwater meadows. Eelgrass meadows are teaming with life and are important for biological diversity. They are nursing grounds for many fish and crustaceans. They also contribute to reducing eutrophication and climate change by absorbing and storing large quantities of nutrients and carbon in the sediment. Eelgrass meadows are among the most productive ecosystems on earth but face threats as eutrophication and overfishing. Other threats include the impact of humans in shallow coastal waters, such as building of docks, dredging and anchoring from boats.

Contact:
Marlene Jahnke, researcher at the Department of Marine Sciences at the University of Gothenburg

Per-Olav Moksnes, senior lecturer at the Department of Marine Sciences at the University of Gothenburg