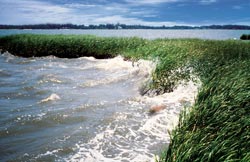 Natural coastline like this in Rehoboth Bay, Del., can protect homes and cities against storms.<br>

Extreme weather, sea level rise and degraded coastal systems are placing people and property at greater risk along the coast. Natural habitats such as dunes and reefs are critical to protecting millions of U.S. residents and billions of dollars in property from coastal storms, according to a new study by scientists with the Natural Capital Project at the Stanford Woods Institute for the Environment.

The study, “Coastal habitats shield people and property from sea-level rise and storms,” published July 14 in the journal Nature Climate Change, offers the first comprehensive map of the entire U.S. coastline that shows where and how much protection communities get from natural habitats such as sand dunes, coral reefs, sea grasses and mangroves. The likelihood and magnitude of losses can be reduced by intact ecosystems near vulnerable coastal communities.

One map shows predicted exposure of the United States coastline and coastal population to sea level rise and storms in the year 2100. An interactive map can be zoomed in on for the West, Gulf or East coasts; Hawaii or Alaska; or the continental United States.

“The natural environment plays a key role in protecting our nation's coasts,” said study lead author Katie Arkema, a Woods postdoctoral scholar. “If we lose these defenses, we will either have to have massive investments in engineered defenses or risk greater damage to millions of people and billions in property.”

With the release of the Obama administration's Climate Action Plan on June 25, there is renewed interest in coastal resilience and climate adaptation planning, as well as in finding natural ways to protect America's coastline. Billions of dollars will soon be spent on restoration activities in the Gulf of Mexico and the Eastern Seaboard affected by Hurricane Sandy. Leaders can make decisions now to factor natural capital into decisions that could have long-term benefits.

“As a nation, we should be investing in nature to protect our coastal communities,” said Mary Ruckelshaus, managing director of the Natural Capital Project. “The number of people, poor families, elderly and total value of residential property that are most exposed to hazards can be reduced by half if existing coastal habitats remain fully intact.”

At a moment when many coastal planners are considering their options for dealing with the impacts of sea level rise, the study provides both a national and a localized look at coastal areas where restoration and conservation of natural habitats could make the biggest difference.

“Hardening our shorelines with sea walls and other costly engineering shouldn't be the default solution,” said Peter Kareiva, the chief scientist at The Nature Conservancy and co-author of the study. “This study helps us identify those places and opportunities we have to keep nature protecting our coastal communities – and giving us all the other benefits it can provide, such as recreation, fish nurseries, water filtration and erosion control.”

The Natural Capital Project is a partnership with the Stanford Woods Institute for the Environment, the University of Minnesota's Institute on the Environment, The Nature Conservancy and the World Wildlife Fund, aimed at aligning economic forces with conservation. The project works to integrate ecosystem services approaches into all major resource decisions that affect Earth's natural resources.

For more information about the study, visit naturalcapitalproject.org.

Elizabeth Rauer is the communications manager for the Natural Capital Project.