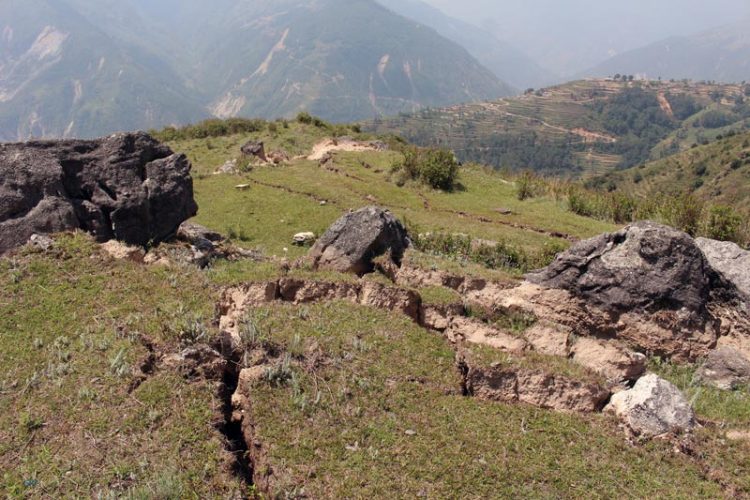 These new findings are presented by a German-Franco-Japanese team of geoscientists in the current issue of the journal Geology, under the lead of the GFZ German Research Centre for Geosciences. Even after strong earthquake the activity of landslides returns back over the course of one to four years to the background level before the earthquake.

The interactions over time between earthquakes and processing shaping the landscape are still not well understood. The geoscientists have investigated areas affected by landslides related to four moderate to severe earthquakes (6.6 to 7.6 on Richter scale).

“The main difficulty was that one must distinguish between the meteorological and the seismic causes of landsliding. Heavy rain can also produce landslides and can enhance landsliding after an earthquake”, says GFZ scientists Marc Odin, the lead author of the study.

Two processes are interacting here. A strong earthquake shakes soil layer loose from the underlying bedrock and also damages the rock below the top soil. Water seeps into the resulting the cracks and crevices and acts like a lubricating film on which a mountain slope slides into the valley.

With the present results of the team of geoscientists, this conceptual model has to be modified. “We analytically separated the effect of the rain from the seismic activity and so were able to determine that the decrease of landslides through time is based on an internal healing process of the landscape,” said Marc Odin.

The destabilization of the landscape caused by the quake gradually recovers. In the course of months to years, depending on weather, rocks and the strength of the earthquake, the slide rates return to the pre-earthquake level: The cracks slowly get closed again or are filled with sand and earth. The landscape self-heals its underlayer and returns to its background hazard potential.

This research is highly relevant: currently the GFZ analyzes these processes in the context of the Nepal-quake of April this year: “We had the chance to start a series of measurements directly after the quake and continue for the next few years,” explained Niels Hovius, Head of the Section “Geomorphology” at the GFZ, about the current deployment of his team in the Himalayas.