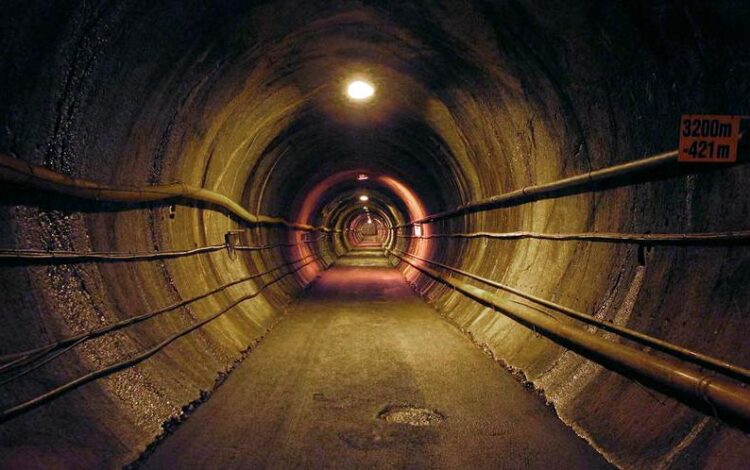 The Äspö Hard Rock Laboratory, where the "Deep Biosphere" was studied, is an extensive tunnel system near Oskarshamn, Sweden, that reaches nearly 500 meters deep, in places even extending beneath the Baltic Sea.
Margarita Lopez-Fernandez

A research team with lead author Helena Osterholz of the Leibniz Institute for Baltic Sea Research (IOW) reports in the latest issue of the journal Nature Communications on possible pathways by which microbial communities in the nutrient-poor “deep biosphere” can ensure survival. Among others, dissolved organic matter (DOM) was investigated in different deep groundwaters. Result: Already in the uppermost layers of the bedrock most of the labile matter is converted. Below that, mixing processes dominate. The remaining refractory DOM leads to the selection of a core microbiome that can feed on this hard-to-digest food.

Deep beneath the surface biosphere that surrounds us, where the cycle of life is driven mainly directly by photosynthesis, a “deep biosphere” exists, extending several kilometres down into the lithosphere. It contains about a quarter of the total global microbial biomass and is thus an important contributor to the Earth’s carbon budget. Via deep groundwaters, this biosphere comes into contact with a broad spectrum of dissolved organic matter (DOM). This DOM theoretically represents a major food source for microorganisms. Yet, little is known about the role that the composition and associated bioavailability of these substances play in the nutrition of the deep continental biosphere, which is generally characterised by nutrient and energy depletion – i. e., rather hostile conditions.

This is not least due to the fact that access to this world is extremely difficult. The Äspö Hard Rock Laboratory on the Swedish Baltic coast, however, offers excellent research conditions. A 3.6 km long tunnel system, which partly extends under the Baltic Sea, provides access to groundwaters in the deep subsurface of the Scandinavian Shield. A German-Swedish team with researchers from Linnaeus University, Kalmar, Swedish University of Agricultural Sciences, Uppsala, the Äspö Hard Rock Laboratory, Oskarshamn, Terralogica AB, Carl von Ossietzky University, Oldenburg, and the IOW obtained water samples from different depths of this tunnel. Depending on the position within the tunnel system, they sampled groundwaters that was either influenced by precipitation or the brackish water of today’s Baltic Sea, or that was in contact with salt water from a predecessor sea. Their hypothesis: The microbial communities in the deep fractures of the continent are fed from the Earth’s surface – by the DOM. To test this, the team compared the concentration and molecular composition of DOM along with stable and radiogenic carbon and water isotope levels, water chemistry and microbial community structure in fissure water samples of different depths, ages, and origins.

“By applying diverse investigation methods we were able to show that the DOM contains a strong terrigenous signature in all samples – from recent Baltic Sea-influenced to ancient saline fracture waters of the Fennoscandian Shield, which have been stored in the bedrock for more than 100,000 years,” Warnemünde marine chemist Helena Osterholz explains the results. “But it’s also striking that a core microbiome can always be found, even though the chemistry of the groundwaters was completely different.”

The authors attribute the finding to the fact that on the way from surface to groundwater, the easily decomposable carbon compounds in the DOM are degraded, leaving the refractory organic matter. This dominant supply of relatively hard to digest organic matter in turn triggered the selective formation of a core microbiome.

Helena Osterholz is certain: “With regard to the importance of the DOM in the nutrient supply of aquatic systems, we are only scratching the surface. In the deep biosphere below Sweden, we were able to show that a multi-method approach yields new insights. This is best done in exciting collaborations like this, where microbiologists, geologists and chemists came together to combine their expertise.”

The IOW is a member of the Leibniz Association that connects 97 independent research institutions that range in focus from natural, engineering and environmental sciences to economics, spatial and social sciences and the humanities. The institutes are jointly financed at the state and national levels. The Leibniz Institutes employ a total of 20,000 people, of whom 10,000 are scientists. The total budget of the institutes is 1.9 billion Euros. http://www.leibniz-association.eu