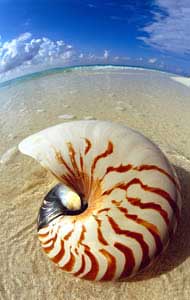 Water trapped for millions of years gives a glimpse of oceans’ turbulent past.

Drops of sea water entombed within salt crystals millions of years ago are giving researchers a glimpse of ancient oceans. The water, trapped during evaporation, reveals that the seas have seen large chemical changes during their history.

“The consensus had been that sea-water chemistry hadn’t changed that much over the past 600 million years,” says geochemist Juske Horita of Oak Ridge National Laboratory, Tennessee. The trapped drops are the “first strong evidence” to the contrary, he says.

Geologist Tim Lowenstein, of the State University of New York, Binghamton, and his colleagues gathered crystals from rock salt deposits, froze them and sliced them open. Using X-rays, they probed the chemical composition of water pockets as small as 30 micrometres across – one third of the width of a human hair1.

Crystals from Australia, the Middle East and the Americas, spanning the past 550 million years, suggest that the ratio of calcium to magnesium in sea water has fluctuated by a factor of more than five.

This record needs to be read with care, cautions geologist Robert Goldstein, of the University of Kansas. Salt crystals form only in unusual environments such as lagoons. To translate the droplets into an accurate reflection of the ocean of the time requires “many, many assumptions”, Goldstein says.

Despite these drawbacks, Horita believes that “it is probably the best geological record we have right now”.

Drop in the ocean

The challenge now is to match the mooted changes in sea-water chemistry with the geological forces that might have caused them. Possible suspects include underwater volcanoes and earthquakes.

When sea-floor plates move apart they release calcium into the water. Lowenstein’s team found that calcium-rich sea water tended to come from periods of ocean-floor spreading.

“It’s a neat picture,” says Goldstein. But it’s not complete. Minerals washed off the land by rivers also influence ocean chemistry, as does the atmosphere, he points out.

Recreating how atmosphere, Earth and ocean interacted in the past should help us predict how ocean chemistry will respond to future forces such as rising levels of greenhouse gases. But, warns Goldstein, the final story “will be a lot more complicated than we could ever have imagined”.

Life also plays its part. Animals remove large amounts of calcium – a key component of shells and skeletons – from the ocean. Lowenstein’s team saw a large rise in the amount of calcium in the ocean around the time of the Cambrian Explosion.

“This is the period about 540 million years ago when the major animal groups appear in the fossil record. Rising calcium may have stimulated the origin of shelled organisms”, Lowenstein speculates.