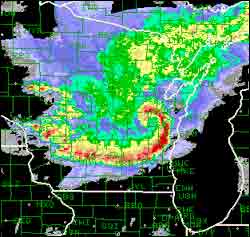 A set of newly documented small-scale circulations embedded in thunderstorm squall lines not only spew destructive straight-line winds, but may spawn up to 20% of all U.S. tornadoes. And the remnant circulations from large thunderstorm clusters can survive for days, triggering new storm cells. Over warm oceans, similar remnant circulations provide seed for hurricane development. Scientists expect these and other findings to help improve forecasts of damaging winds and heavy rain.


The new results emerge from three-dimensional portraits of thunderstorms collected across the storm-tossed Midwest in a field study coordinated by the National Center for Atmospheric Research (NCAR) in 2003. A summary will be presented on October 5 in Hyannis, Massachusetts at the American Meteorological Society’s 22nd Conference on Severe Local Storms.

Based just east of St. Louis, the Bow Echo and MCV Experiment (BAMEX) employed aircraft and ground-based storm chasers to document a wide range of storm types that prowled the Midwest from May to July 2003. Over a dozen colleges and universities joined NCAR and the National Oceanic and Atmospheric Administration (NOAA) for BAMEX. Key funding for the $4 million study was provided by the National Science Foundation, NCAR’s primary sponsor.

Among the most noteworthy results:

Size doesn’t equal strength when it comes to bow echoes, the arc-shaped squall lines that produce intense straight-line winds and spawn dozens of tornadoes each year. “The greatest damage was typically observed not in the most extensive bow echoes, but in smaller ones spanning 60 miles or less,” says NCAR scientist Christopher Davis, co-science director of BAMEX. Within these small bows, even smaller circulations appear to focus most of the storm’s destructive power and the highest risk for tornadoes.

Mesoscale convective vortices (MCVs)—areas of low pressure similar in strength and size to weak tropical depressions—extend through a deep layer of the atmosphere. These MCVs, which can trigger multiday rounds of intense thunderstorms, tend to destabilize the atmosphere as they pull warm, moist surface air northward.

Up to now, forecasters haven’t been able to tell in advance just when an intense thunderstorm might morph into a destructive bow echo. The process appears to hinge on small-scale factors that everyday weather observations can’t trace and radar operators can’t easily spot.

The result is a set of three-dimensional portraits that will help scientists unravel the processes driving the high winds and heavy rains of bow echoes. For instance, about two hours after damaging winds struck eastern Nebraska on the night of June 9, 2003, BAMEX aircraft showed winds of over 90 miles an hour howling less than a mile and a half above ground level, even as the surface winds had decreased.

“With the data from BAMEX, we’ll be studying several indicators that might provide advance notice of when severe surface winds might develop,” says Davis. These include local enhancement of thunderstorm cells within a line, bands of convergent wind at the surface that feed into a thunderstorm complex at right angles, and other characteristic wind signatures detected aloft by Doppler radar. Forecasters from the National Weather Service (NWS) joined NCAR and university collaborators in gaining a better awareness and understanding of bow echoes through BAMEX, Davis says.

When one storm complex leads to another

Whether over land or sea, thunderstorm complexes can generate broad areas of low pressure, from about 30 to 200 miles in width, that survive after the storms die off. Once formed, one of these mesoscale convective vortices (MCVs) can merge with a cold front, grow to become a larger center of low pressure, and/or generate new thunderstorms for one or more days. It may even become the seed of a tropical or subtropical cyclone if it passes over warm ocean water.

“There’s remarkable continuity in the spectrum of cyclones as you go from midlatitudes to the tropics,” says Davis. “I’m confident that there are some real similarities among these cyclones, especially in the early stages of development.”

A sharper picture of future storms

The Weather Research and Forecasting computer model, soon to enter regular use at the NWS, showed surprising skill at high resolution in projecting storm types 24 to 36 hours in advance during the 2003 BAMEX field campaign, according to NCAR’s Morris Weisman, one of the project’s lead scientists. The special simulations were performed again this summer at NCAR and made available to NWS forecasters on line. At its finest resolution of about 2.5 miles, the model can help forecasters determine whether to expect squall lines, isolated supercells, or other types of storms.

“The output was used daily by forecasters across most of the central United States,” says Weisman. “They’ve told us this new information is really valuable to their outlooks.”