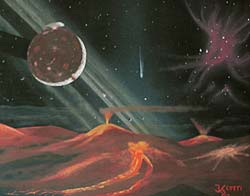 Artist’s illustration of early Earth, 4.5 billion years ago, about a year after a Mars-sized object hit Earth and formed the Earth-Moon system. The still molten moon with an impact in progress (upper left) is viewed from Earth’s volcanic surface. Meteorites and comets -- like the comet visible in the sky -- delivered materials needed for life on Earth. Rings remaining from the collision and other debris, including moonlets not yet swept up by the moon, are visible. An Orion-like nebula appears at upper right. (Painting copyrighted by artist James V. Scotti, UA Lunar & Planetary Lab)

University of Arizona scientists have discovered that meteorites, particularly iron meteorites, may have been critical to the evolution of life on Earth.

Their research shows that meteorites easily could have provided more phosphorus than naturally occurs on Earth — enough phosphorus to give rise to biomolecules which eventually assembled into living, replicating organisms.

Phosphorus is central to life. It forms the backbone of DNA and RNA because it connects these molecules’ genetic bases into long chains. It is vital to metabolism because it is linked with life’s fundamental fuel, adenosine triphosphate (ATP), the energy that powers growth and movement. And phosphorus is part of living architecture – it is in the phospholipids that make up cell walls and in the bones of vertebrates.

“In terms of mass, phosphorus is the fifth most important biologic element, after carbon, hydrogen, oxygen, and nitrogen,” said Matthew A. Pasek, a doctoral candidate in UA’s planetary sciences department and Lunar and Planetary Laboratory.
But where terrestrial life got its phosphorus has been a mystery, he added. Phosphorus is much rarer in nature than are hydrogen, oxygen, carbon, and nitrogen.

“Because phosphorus is much rarer in the environment than in life, understanding the behavior of phosphorus on the early Earth gives clues to life’s orgin,” Pasek said.

The most common terrestrial form of the element is a mineral called apatite. When mixed with water, apatite releases only very small amounts of phosphate. Scientists have tried heating apatite to high temperatures, combining it with various strange, super-energetic compounds, even experimenting with phosphorous compounds unknown on Earth. This research hasn’t explained where life’s phosphorus comes from, Pasek noted.

Pasek began working with Dante Lauretta, UA assistant professor of planetary sciences, on the idea that meteorites are the source of living Earth’s phosphorus. The work was inspired by Lauretta’s earlier experiments that showed that phosphorus became concentrated at metal surfaces that corroded in the early solar system.

“This natural mechanism of phosphorus concentration in the presence of a known organic catalyst (such as iron-based metal) made me think that aqueous corrosion of meteoritic minerals could lead to the formation of important phosphorus-bearing biomolecules,” Lauretta said.

“Meteorites have several different minerals that contain phosphorus,” Pasek said. “The most important one, which we’ve worked with most recently, is iron-nickel phosphide, known as schreibersite.”

“We saw a whole slew of different phosphorus compounds being formed,” Pasek said. “One of the most interesting ones we found was P2-O7 (two phorphorus atoms with seven oxygen atoms), one of the more biochemically useful forms of phosphate, similar to what’s found in ATP.”

Previous experiments have formed P2-07, but at high temperature or under other extreme conditions, not by simply dissolving a mineral in room-temperature water, Pasek said.

“This allows us to somewhat constrain where the origins of life may have occurred,” he said. “If you are going to have phosphate-based life, it likely would have had to occur near a freshwater region where a meteorite had recently fallen. We can go so far, maybe, as to say it was an iron meteorite. Iron meteorites have from about 10 to 100 times as much schreibersite as do other meteorites.

“I think meteorites were critical for the evolution of life because of some of the minerals, especially the P2-07 compound, which is used in ATP, in photosynthesis, in forming new phosphate bonds with organics (carbon-containing compounds), and in a variety of other biochemical processes,” Pasek said.

“I think one of the most exciting aspects of this discovery is the fact that iron meteorites form by the process of planetesimal differentiation,” Lauretta said. That is, the building-blocks of planets, called planestesmals, form both a metallic core and a silicate mantle. Iron meteorites represent the metallic core, and other types of meteorites, called achondrites, represent the mantle.

“No one ever realized that such a critical stage in planetary evolution could be coupled to the origin of life,” he added. “This result constrains where, in our solar system and others, life could originate. It requires an asteroid belt where planetesimals can grow to a critical size – around 500 kilometers in diameter – and a mechanism to disrupt these bodies and deliver them to the inner solar system.”

Jupiter drives the delivery of planetesimals to our inner solar system, Lauretta said, thereby limiting the chances that outer solar system planets and moons will be supplied with the reactive forms of phosphorus used by biomolecules essential to terrestrial life.

Pasek is talking about the research today (Aug. 24) at the 228th American Chemical Society national meeting in Philadelphia. The work is funded by the NASA program, Astrobiology: Exobiology and Evolutionary Biology.