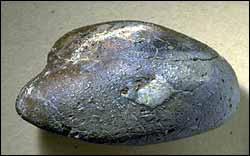 This is how meteorite SaU 169 looked when its discoverers initially inspected it in the lab. The maximum dimension is 7 centimeters, or not quite 3 inches. (Photo: Peter Vollenweider)

Scientists have pinpointed the source of a meteorite from the moon for the first time. Their unique meteorite records four separate lunar impacts.

They are the first to precisely date Mare Imbrium, the youngest of the large meteorite craters on the moon. That date, 3.9 billion years ago, is a new key date for lunar and even terrestrial stratigraphy, the scientists say, because life on Earth would have evolved only after heavy meteorite bombardment ended.

Geologists who found the meteorite and scientists from Swiss, Swedish, German, British, and Arizona laboratories who analyzed the unique stone report their work in the July 30 issue of Science. Swiss geologist Edwin Gnos is first author of the article titled “Pinpointing the Source of Lunar Meteorite: Implications for the Evolution of the Moon.”

Gnos, Ali Al-Kathiri and Beda Hofmann found the 206-gram (7-ounce) meteorite in Oman on Jan. 16, 2002. The geologists were on a joint meteorite search expedition sponsored by the Government of Oman, the Natural History Museum of Berne and the University of Berne.
This is how meteorite SaU 169 looked when its discoverers initially inspected it in the lab. The maximum dimension is 7 centimeters, or not quite 3 inches. (Photo: Peter Vollenweider)

“The desert in Oman is the new place to find meteorites,” said A.J. Tim Jull of the University of Arizona in Tucson. Jull directs the National Science Foundation – Arizona Accelerator Mass Spectrometry (AMS) Laboratory. He analyzed beryllium and carbon isotopes that told how long the meteorite was in space after it was launched from the moon and how long ago it fell to Earth at Oman.

Scientists who’ve acquired the special permits needed to search for meteorites in Oman and North Africa during the past half-dozen years have been amply rewarded, Jull said. Seven of the 30 known lunar meteorites have been found in Oman, and five have been found in North Africa. One was found in Australia and the rest have been found in Antarctica. Hot or cold, arid climates preserve meteorites from quickly weathering, Jull noted.
Gnos, Al-Kathiri and Hofmann recognized in the field that the meteorite was of lunar or martian origin because it wasn’t magnetic. Meteorites from planetary bodies don’t contain metal. And, typical of lunar rocks, it was greenish colored and contained white angular feldspar inclusions.

But when they tested it with a Geiger counter, they found it was no typical lunar rock. They found it contained high levels of radioactive uranium, thorium and potassium. Gamma ray-spectroscopy lab tests told them that the ratios between these elements fit only one enigmatic group of lunar rocks called “KREEP,” the acronym of K for potassium, REE for rare earth elements, and P for phosphate.

“At that moment, it was clear that the rock had something to do with the large Imbrium impact basin, the right eye of the man in the moon,” Gnos et al. report on the Web at http://www.geo.unibe.ch/sau169. The Imbrium impact basin on the lunar nearside is the only area where KREEP rocks are found. KREEP rocks are known both from samples returned by the Apollo missions and by NASA’s Lunar Prospector Orbiter radioactivity survey in 1998-99.

The scientists conducted a battery of laboratory tests to piece together a detailed history of the meteorite, named Sayh al Uhaymir (SaU) 169. They summarize SaU 169’s history:

At 3.909 billion years ago, plus or minus 13 million years – An asteroid collides with the moon, forming the 1160 km (720-mile) diameter Imbrium impact basin. Crushed and molten rocks mix and solidify to form the main rock type in meteorite SaU 169.
At 2.8 billion years ago – A meteorite hits the moon, forming the 25 km (15-mile) diameter Lalande crater south of the Imbrium basin. The impact blasts material, including the main rock type in SaU 169, from depth and deposits it as an ejecta blanket around the crater. The ejecta there mixes with other lunar soil.

At 200 million years ago – Another impact brings the rock that will become a meteorite to within a half-meter (20 inches) of the lunar surface.

At less than 340,000 years ago – Another impact hits the moon, producing a crater a few kilometers in diameter and ejects SaU 169 from the moon. The scientists studied NASA images and identified a young, 3 km (1.8-mile) diameter crater 70 km (43 miles) north-northeast of Lalande as the meteorite’s likely launch site. Jull measured beryllium 10 in SaU 169 and determined the meteorite’s moon-to-Earth transit time at around 300,000 years. He also measured carbon 14 in SaU 169, which shows the meteorite fell in present-day Oman around 9,700 years ago, plus or minus 1,300 years.

“Without the Apollo and Luna sampling programs, and especially the huge advance in knowledge of the Moon acquired during investigations in the last 20 – 30 years, we would only be able to tell that SaU 169 is an exceptional lunar rock,” the scientists said on their Website. “Without background information from such missions as Clementine and Lunar Prospector, we could never have linked ages and chemical data with lunar surface information.” “SaU is a rock which demonstrates impressively how rocks can travel, like a ping-pong-ball, from one body to another,” they said.