Investigating the deepest layers of the Earth’s crust 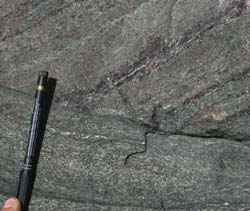 The deep layers of the Earth’s crust and the upper part of its mantle have been the target for investigation by a number of research groups at the EHU/UPV. This deep zone, and the processes that have taken place there in the past, can be investigated by means of studying those rocks which today are lying on the surface but which in past geological periods were at great depths.

On the Iberian Peninsula there are few places where one can find rocks which have been submerged at such depths (greater than 50-60 km). One of these is situated in the north-east zone of the Iberian Massif, occupying parts of Galicia and north-east Portugal. Geologically the area is known by the name of the North East Peninsular Allochthonous Complex.

Knowing the rocks’ past

Research work carried out by geologists has as its staring point extensive field-work. It is paramount to identify and collect suitable rock samples for such studies, given that the information contained within their structure tells us the history of their formation and of the processes which have occurred, in the case in hand, in the deeper layers of the Earth’s crust. Of course there are rock samples which have a “memory” of such processes that is more complete than others and that is why the selection process and the final in situ selection of rocks to be studied is of prime importance.

First and foremost, a geological mapping of the zone is carried out where specific rocks are to be found, at the same time analysing their macrostructure, i.e., the spatial organisation of those elements that can be seen at first sight and the presence of which is on a large scale. In this way the most suitable samples can be selected for microscopic study, to which end they are cut and polished until they are fine, transparent laminas of 30 micros thickness. Moreover, various techniques are used such as geochronology, paleomagnetic analysis or elemental and isotopic geochemical study, amongst others.

For example, the composition of and the relationship amongst the minerals making up these rocks provide us with knowledge of the conditions under which they were formed, their deformations enable the behaviour of these materials within the deeper layers of the Earth’s crust to be known and, finally, by means of radiogenic isotope study, the age of the rocks and that of their deformations or recrystallisations may be established.

Other samples are used to establish the geodynamic environment in which they were originally formed, i.e. if they originated in continental earth crust, from oceanic crust (on an island or at the centre of an ocean), or if they were formed under the crust, within the mantle.

The research carried out by the group over the last few decades have given rise to some very interesting conclusions. The rocks pertaining to allochthonous rocks in the north-east zone of the Iberian Massif originated, according to this data, some 450-500 million years ago. In some cases, basalts were formed at the ocean’s bottom and, later, through a process of subduction or the sinking of and oceanic tectonic plate below another, continental, one, they became submerged at depths greater than 60 km and were transformed into eclogites, very dense rocks. This process of subduction occurred probably due to movements of two or more tectonic plates which gave rise to a closure of an ancient ocean or sea known as a Rheic ocean. This happened some 380-400 million years ago.

Subsequently, the eclogites and other associated rocks were unearthed (revealed or uncovered) until they appeared at the Earth’s surface, emerging in the form as we know them today in a process that lasted some 20-30 million years. This final return to the surface is calculated to have happened some 300 million years ago. Thus, it has been possible to reconstruct a long and complex history which reveals and describes some of the processes that have occurred within the deeper layers of the Earth’s crust, levels which are currently not accessible to direct observation.