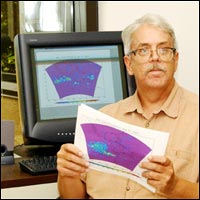 It´s tricky, this weather business — predicting drought, floods, rain or snow, especially months in advance. But NASA scientists at the National Space Science and Technology Center in Huntsville, Ala., are working to take the guesswork out of long-term prediction.

“We´re researching methods to predict precipitation a season or more in advance,” said Dr. Bob Oglesby, a senior atmospheric scientist at the research center. The key, he said, is understanding how the atmosphere interacts with the land — sometimes in a way that completely alters the expected climate of a geographic area.

“The Gulf of Mexico, for example, is what keeps the Southeast from becoming semi-arid, or in the worst-case scenario, a big desert,” he said, explaining that atmospheric flow sweeps primarily from west to east. Without the gulf, states like Alabama, Tennessee and Georgia would be forced to seek moisture from the Pacific Ocean. “But a series of mountain ranges blocks the way,” he said. “If it weren´t for the nearby gulf, the lush, green landscapes of Southeast might more closely resemble the semi-arid landscapes of the great plains.”

Just as mountain ranges can block moisture from an entire region, ridges of atmospheric pressure act as similar obstacles — blocking out much-needed moisture where conditions are dry, resulting in a “thermal mountain effect,” first identified in 1953.

This self-perpetuating cycle is due to the interaction of moisture in the soil with the atmosphere. If the amount of rain or snowfall drops below average, the soil becomes dry. Then, as the Sun heats the Earth, less moisture is available for evaporation.

With the resulting reduction in evaporation — and its cooling effects — the surface of the Earth warms, heating the atmosphere. As the atmosphere´s temperature increases, air rises. This cycle reinforces the ridge of high pressure, enhancing its abilities to block the flow of moisture from bodies of water as well as reducing the likelihood of thunderstorm formation.

Drought conditions also may be predicted by studying other factors, including sea surface temperature variations such as those associated with ocean warming effects from El Niño, and ocean cooling effects from La Niña; north Atlantic oscillation, or air flow; and snow cover in surrounding regions.

Oglesby´s research uses computer models to simulate and predict weather conditions, using data such as soil moisture, precipitation and Earth´s surface temperature. The biggest challenge in making long-term predictions, he said, is a lack of sufficient data on soil moisture, especially moisture in lower layers of the soil.

“If someone could provide us with the state of soil moisture over a sufficiently large area, we can begin to predict its impact on precipitation over the next season or two,” he said. Oglesby sees hope for better data in the future from NASA remote sensing technology that gleans information using satellite or flights over select areas.

Above-average rainfall or snow in the winter or spring can increase soil moisture to levels needed to help break the cycle of drought. But an average series of short, light rain showers — common in much of the South — are not generally enough, said Oglesby. “Even though surface soil may be wetted periodically, light rains may not drop enough moisture to reach lower soil areas. These perpetually dry areas, in turn, cause top soil to dry more quickly — once again hindering the Earth´s natural cooling process.”

But there is hope even in the midst of drought conditions. “Even in a dry, Alabama summer, it rains,” said Oglesby, noting that large-scale circulation and thunderstorms in the summer can also break the cycle of drought. “The trick,” he said, “is replenishing the moisture in the soil before it´s too late.”

From NASAs Marshall Space Flight Center in Huntsville, Oglesby has co-authored three research papers since 2001, published in the Journal of Climate and the Journal of Geophysical Research. Topics include diagnosing warm season precipitation, thresholds in atmosphere-soil moisture interactions and the predictability of winter snow cover over the Western United States.

Oglesby has a bachelors degree in physical geography from the University of California in Davis and a doctorate in atmospheric dynamics from Yale University in New Haven, Conn. He is based at the Global Hydrology and Climate Center, one of seven science research centers at the National Space Science and Technology Center, a partnership with NASAs Marshall Space Flight Center, Alabama universities, industry and federal agencies.