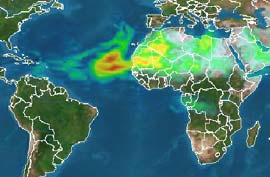 While the previous NOAA images show aerosols blowing across the ocean, these two images from NASA’s Total Ozone Mapping Spectrometer (TOMS) instrument show dust coming off regional land sources in Africa as they follow their path across the Atlantic. The TOMS instrument aboard the Earthprobe TOMS satellite, captured these images of the dust event from June 17, 1999, as it leaves Africa. <br> <br>The second image (below) from July 2, 1999, shows the progression of this event as it approaches North America. <br> <br>Credit: "Laboratory for Atmospheres TOMS Project, NASA Goddard Space Flight Center" <br>

Dust from the Sahara Desert in Africa may help modify clouds and rainfall both in Africa and across the tropical North Atlantic, as far away as Barbados, according to a study that uses 16 years of data from NASA satellites, ground measurements and computer models.

The dust particles act as surfaces, or kernels, for water vapor to attach to in low clouds, and for ice crystals to form around in higher clouds.

The study’s authors, Natalie Mahowald, a researcher at the National Center for Atmospheric Research, Boulder, Colo., and University of California, Santa Barbara (UCSB), and Lisa Kiehl, a graduate student at UCSB, believe the interaction between clouds and aerosols is critical for understanding climate change. Clouds play a pivotal role in reflecting and absorbing the Sun’s rays. Clouds also absorb and reflect radiation emitted from Earth’s surface. The dust and cloud interplay also helps explain rainfall patterns over the Sahara Desert and south of that area.

In low clouds such as cumulus and stratocumulus clouds, near the Sahara desert, water attaches to the dust particles. Higher dust concentrations can suppress rainfall and enhance drought conditions, by dispersing water among the dust particles, so that water droplets are not heavy enough to fall. This creates more thin low clouds, and less rain.

In high clouds, such as cirrus, cirrostratus, and deep convective clouds, there is some evidence that dust particles over wetter regions south of the desert provide surfaces for ice crystals to form around. These ice crystals grow rapidly, drawing moisture from surrounding cloud droplets, become heavier and fall, generating more rain and reducing the total amount of high clouds.

Dust from North Africa, where the desert lies, has blown increasingly into the atmosphere since the 1960s. Though the reasons for this are not clearly understood, some scientists believe the increase may be linked to human activity.

The study, which appeared in a recent issue of Geophysical Research Letters, used 16 years of monthly mean observations from satellites, ground stations, and computer models to look at the relationship between dust particles in the air, called mineral aerosols, and cloud properties.

Data on how many and how thick clouds were, and cloud top pressure and temperature, came from NASA’s International Satellite Cloud Climatology Project (ISCCP). ISCCP data covered 1984 to 1999 and combined Advanced Very High Resolution Radiometer (AVHRR) data from 3 satellites created and launched by NASA, including GOES-8, GOES-10, and GOES-12.

The study also used data from the Total Ozone Mapping Spectrometer (TOMS) instrument to determine the amount of radiation being absorbed by aerosols between 1984 and 1990. Data from the ground in Barbados was collected by the University of Miami.

This is the first long-term regional study to confirm observations that mineral aerosols in both low and high clouds can act as kernels for precipitation to form around. It is also the first study to suggest that African dust interacts with clouds over a large region.

The study found a positive correlation between low altitude cloud amounts and dust at the coast of North Africa, which supports the theory that dust particles act as a place for water droplets to form around in thin low clouds.

The researchers also found a negative association between high clouds and dust along the equator across North Africa and the Atlantic Ocean. That is, more dust creates heavy ice particles in high clouds that rain down and ultimately reduce high cloud amounts. Still, since there are no long term ground measurements for dust and high clouds in these areas, and because it has been hard to measure these high clouds with satellites, it is difficult to make firm conclusions regarding ice forming around dust kernels, high clouds and rainfall.

NASA’s Earth Science Enterprise is committed to studying the primary causes of the Earth system variability, including both natural and human-induced causes.

NASA funded the study in cooperation with National Science Foundation. The study exemplifies the unique advantages of space-based platforms for monitoring global transport, interactions, and feedbacks of aerosols.