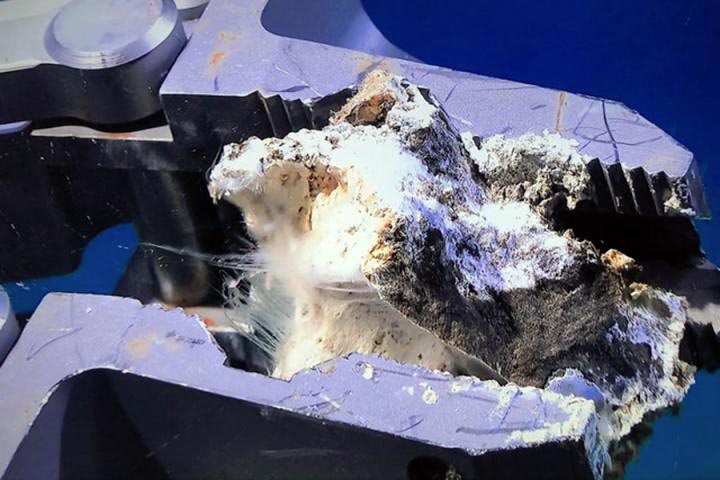 A team led by University of Minnesota researchers has discovered that deep-sea bacteria dissolve carbon-containing rocks, releasing excess carbon into the ocean and atmosphere. The findings will allow scientists to better estimate the amount of carbon dioxide in Earth’s atmosphere, a main driver of global warming.

The study is published in The ISME Journal: Multidisciplinary Journal of Microbial Ecology, a peer-reviewed scientific journal that is part of the Nature family of publications and the official journal of the International Society for Microbial Ecology (ISME).

“If CO2 is being released into the ocean, it’s also being released into the atmosphere, because they’re constantly interchanging gases between them,” explained Dalton Leprich, the first author on the paper and a Ph.D. student in the University of Minnesota’s Department of Earth and Environmental Sciences. “While it’s not as big of an impact as what humans are doing to the environment, it is a flux of CO2 into the atmosphere that we didn’t know about. These numbers should help us home in on that global carbon budget.”

The researchers began studying sulfur-oxidizing bacteria–a group of microbes that use sulfur as an energy source–in methane seeps on the ocean floor. Akin to deep-sea coral reefs, these “seeps” contain collections of limestone that trap large amounts of carbon. The sulfur-oxidizing microbes live on top of these rocks.

After noticing patterns of corrosion and holes in the limestone, the researchers found that in the process of oxidizing sulfur, the bacteria create an acidic reaction that dissolves the rocks. This then releases the carbon that was trapped inside the limestone.

“You can think of this like getting cavities on your teeth,” Leprich said. “Your tooth is a mineral. There are bacteria that live on your teeth, and your dentist will typically tell you that sugars are bad for your teeth. Microbes are taking those sugars and fermenting them, and that fermentation process is creating acid, and that will dissolve away at your teeth. It’s a similar process to what’s happening with these rocks.”

The researchers plan to test out this effect on different mineral types. In the future, these findings could also help scientists use dissolution features–holes, crevices, or other evidence that rocks have been dissolved by bacteria–to discover evidence of life on other planets, such as Mars.

“These findings are but one of the many examples of the important and understudied role that microbes play in mediating the cycling of elements on our planet,” said Jake Bailey, a University of Minnesota Department of Earth and Environmental Sciences associate professor and corresponding author of the study.

In addition to Bailey and Leprich, other members of the research team include research associate Beverly Flood and former researcher Elizabeth Ricci in the University of Minnesota’s Department of Earth and Environmental Sciences; Assistant Professor Jeffery Marlow and Ph.D. student Peter Schroedl at Boston University; and Harvard University Professor Peter Girguis.

This research was funded by grants from the National Science Foundation and NASA, including a NASA Exobiology grant.