Observing the development of a deep-sea greenhouse gas filter 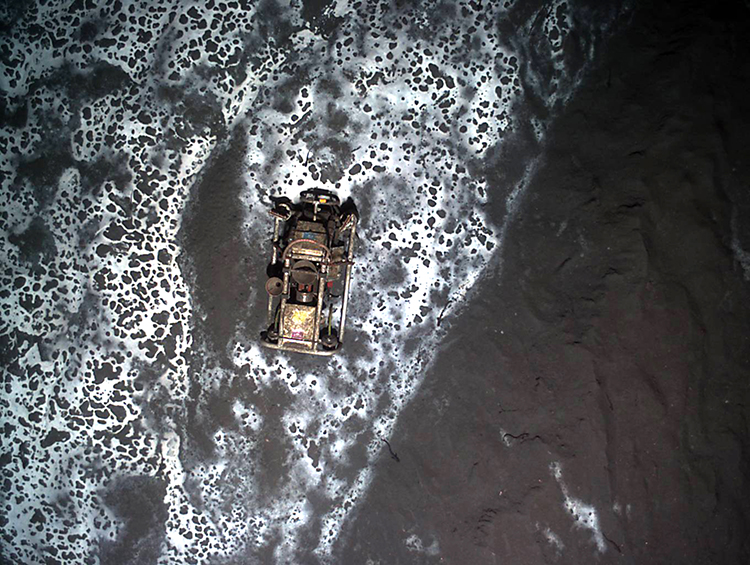 Large quantities of the greenhouse gas methane are stored in the seabed. Fortunately, only a small fraction of the methane reaches the atmosphere, where it acts as a climate-relevant gas, as it is largely degraded within the sediment.

This degradation is carried out by a specialized community of microbes, which removes up to 90 percent of the escaping methane. Thus, these microbes are referred to as the “microbial methane filter”. If the greenhouse gas were to rise through the water and into the atmosphere, it could have a significant impact on our climate.

But not everywhere the microbes work so efficiently. On sites of the seafloor that are more turbulent than most others – for example gas seeps or so-called underwater volcanoes -, the microbes remove just one tenth to one third of the emitted methane. Why is that? Emil Ruff and his colleagues from the Max Planck Institute for Marine Microbiology and the University of Bremen aimed to answer this question.

Methane consumption around a mud volcano

In the North Sea off Norway at 1250 meters water depth lies the Håkon Mosby mud volcano. There, warm mud from deeper layers rises to the surface of the seafloor. In a long-term experiment, Ruff and his colleagues were able to film the eruption of the mud, take samples and examine them closely. “We found significant differences in the different communities on-site. In fresh, recently erupted mud there were hardly any organisms.

The older the mud, the more life it contained”, says Ruff. Within a few years after the eruption, the number of microorganisms as well as their diversity increased tenfold. Also, the metabolic activity of the microbial community increased significantly over time. While there were methane consumers even in the young mud, efficient filtering of the greenhouse gas seems to occur only after decades.

“This study has given us new insights into these unique communities,” says Ruff. “But it also shows that these habitats need to be protected. If the methane-munchers are to continue to help remove the methane, then we must not destroy their habitats with trawling and deep-sea mining. These habitats are almost like a rainforest – they take decades to grow back after a disturbance. “

Antje Boetius, co-author of the study, director of the Alfred Wegener Institute Helmholtz Center for Polar and Marine Research (AWI) and head of the research group for deep-sea ecology and technology at the Max Planck Institute in Bremen and the AWI, emphasizes the importance of national and international research cooperations to achieve such research results:

“This study was only possible through the long-term cooperation between the AWI, the MARUM – Center for Environmental Sciences of the University of Bremen and the Max Planck Institute for Marine Microbiology with international partners in Norway, France and Belgium. Through various EU projects, we have been able to use unique deep-sea technologies to study the Håkon Mosby mud volcano and its inhabitants in great detail”, says Boetius.

Named after the Norwegian oceanographer Håkon Mosby, this mud volcano was discovered in 1990 by an international team of researchers in the Barents Sea at a depth of 1250 meters. Besides water and mud, also gas emerges from the center of the volcano, which covers approximately one square kilometre. The gas, which rises from about two kilometres below the sea floor, consists of 99 percent methane.
Håkon Mosby is a very flat mud volcano with a maximum height of ten meters. Surrounding the crater are three distinct circular zones: the center, the middle and the outer ring. Entirely different communities inhabit these three zones, yet they have one thing in common: methane is the main food source of the organisms on site. Most of the gas is consumed in the outer zone, which can be explained as follows: In the central and middle zone large quantities of methane are available, however there is a lack of oxygen or sulfate required to oxidize the methane. In the outer zone, the situation is different: Tubeworms, which grow up to 60 cm deep into the seafloor, actively pump seawater and thereby sulfate into deeper layers of the sediment. Thanks to these “living pumps”, organisms living at their “roots” can use methane even in regions where that normally wouldn’t be possible. There, hardly any gas escapes to the water column. This clearly shows how the complex interaction of communities on and in the ocean floor is a prerequisite for the development of an efficient biological filter for a greenhouse gas.