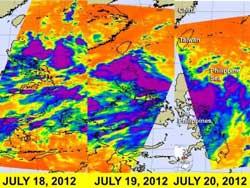 On Wednesday, July 18 at 1705 UTC (1:05 p.m. EDT/U.S.), System 92W's center east of Luzon, and there were several areas of strong convection (rising air that form thunderstorms that make up a tropical cyclone). They appeared disorganized in satellite imagery at that time, however.

On Friday, July 20, at 0441 UTC (12:41 a.m. EDT/U.S.) AIRS data revealed that the area of convection east of Luzon had expanded and strengthened. AIRS data also showed that the low-level circulation center was partially exposed, and that the strongest convection and largest area of showers and thunderstorms were southwest of the center. Northeasterly wind shear is pushing the strongest thunderstorms to that quadrant of the storm. By 0800 UTC (4 a.m. EDT), System 92W had moved to 18.0 North latitude and 124.3 East longitude. That's about 280 nautical miles northeast of Manila, Philippines.