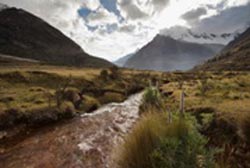 Scientists from the Universities of Amsterdam, Gothenburg and Frankfurt, the Senckenberg Gesellschaft für Naturforschung and the Biodiversity and Climate Research Centre (BiK-F) advocate in today's issue of the journal Nature Geoscience for a closer cooperation between life and earth sciences.

Long-term environmental stability does not correlate with species richness and biodiversity. Rather, recent studies indicate that unstable, changing habitats open new avenues for biodiversity. Especially the uplift of mountain ranges plays a major role: It creates a multitude of dynamic habitats with new climatic and physical conditions and ecological gradients that are available to be colonized by emerging species.

Mountain ranges: Barriers and bridges at the same time

Mountain ranges have various direct impacts on biodiversity: While they prevent the spread of some organisms, they represent bridges between separate habitats for others. Uplifting mountains divide previously continuous habitats, or connect land masses and create new paths for spreading species. Mountainous regions are also home to a variety of species adapted to environmental niches – and these species seem to be less affected by changing climatic conditions than lowland species that occupy a large range: The former only need to move short distances to meet suitable temperature conditions. Thus, due to their high biodiversity, a result of high speciation and low extinction, mountains act as “biodiversity pumps”, feeding the rest of the continents.

Mountains also exert indirect influence on biodiversity. South America’s Amazon basin, for example, immensely rich in biodiversity, would not exist without the Andes. Following the uplift of the mountain range, the Amazon basin formed. The runoff from the Andes and the nutrient-rich sediments provided by constant Andean weathering of rocks form the basis for the unique species richness of the Amazon region. The impact of the mountains even extends far into the Atlantic Ocean: the Amazon Plume, sediments transported by the river which are clearly visible on satellite images, creates geochemical conditions entirely different from neighboring ocean zones. And this is not a unique case: Prof. Dr. Andreas Mulch (BiK-F, SGN and Goethe University), one of the authors points out: “This continental impact of a mountain region as a driver of evolution is not specific to the Andes. It also applies to the Himalayas or the Alps.
Pioneer Alfred Wegener: call for cooperation between earth and life sciences

“Already Alfred Wegener, when he presented his theory of continental drift at the Senckenberg Museum, advocated an interdisciplinary approach,” says Prof. Dr. Volker Mosbrugger, Director General of the Senckenberg Gesellschaft für Naturforschung and co-author of the paper. “But only today, a hundred years later, this cooperation is finally being realized.” To understand formation and vanishing of global biodiversity, earth and life sciences but must join forces. A growing scientific interest in interdisciplinary projects, new molecular techniques and advanced reconstructions of Earth surface processes enable scientists to explain more comprehensively, how geology and climate interact to influence evolutionary processes. In their comment to the journal Nature Geoscience, the scientists argue that research should embrace these joint approaches, since comprehensive understanding of global biodiversity is only to be achieved if the interactions of geo- and biosphere are addressed by interdisciplinary efforts.

LOEWE Biodiversität und Klima Forschungszentrum, Frankfurt am Main
With the objective of analysis the complex interactions between biodiversity and climate through a wide range of methods, the Biodiversität und Klima Forschungszentrum [Biodiversity and Climate Research Centre] (BiK‐F) has been funded since 2008 within the context of the Landes‐Offensive zur Entwicklung Wissenschaftlich-ökonomischer Exzellenz (LOEWE) of the Land of Hessen. The Senckenberg Gesellschaft für Naturforschung and Goethe University in Frankfurt as well as other, directly involved partners, co‐operate closely with regional, national and international institutions in the fields of science, resource and environmental management, in order to develop projections for the future and scientific recommendations for sustainable action.