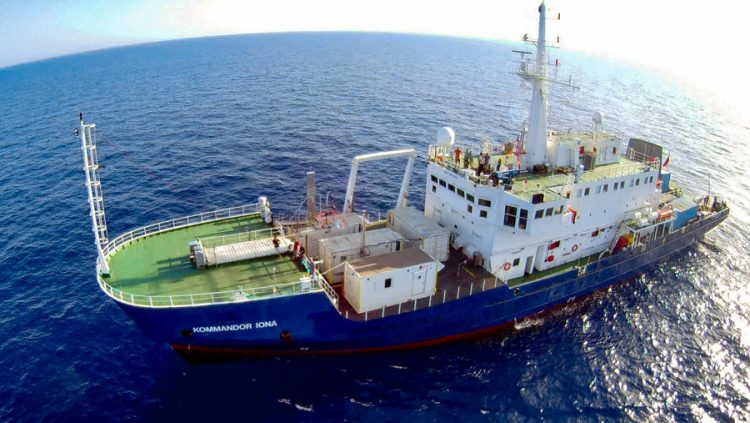 The Middle East accommodates more than half of the world’s known oil and gas reserves. The intense fossil fuel exploitation in this region is responsible for the release of large amounts of gaseous pollutants into the atmosphere. Little research in atmospheric chemistry has been conducted in this area in the past.

A large scientific expedition around the Arabian Peninsula that took place 2017 and was organized by the Max Planck Institute for Chemistry closed that gap. During this expedition, the researchers noticed a strange anomaly.

The levels of ethane and propane in the air above the Northern Red Sea were extremely high: up to 40 times higher than predicted by existing atmospheric models.

According to the model results, biomass burning, fuel production and transmission, and energy industry emissions were supposed to describe the regional hydrocarbon abundance. However, neither of these sources was able to explain the observations.

To investigate this discrepancy, Efstratios Bourtsoukidis, an environmental physicist at the Mainz based institute, and his colleagues analysed in detail each of the possible sources for these emissions such as traffic, agriculture, biomass burning, power generation or oil production.

“Because there was no previous data from this region, we had to run numerous calculations in order to find the source. In the end we came to an unexpected conclusion: the high concentrations of the observed atmospheric ethane and propane originate from the bottom of the northern Red Sea”, says Bourtsoukidis.

More precisely, the sources of these gases are direct fluid seepage from hydrocarbon reservoirs deposited above offshore rocks, bottom-trapped density outflows from the Gulfs of Suez and Aqaba and direct emissions from some brine pools located at the bottom of the sea.

These hydrocarbons are then transported to the surface by water currents and eventually released to the atmosphere. The amount of the released gases is exceptionally high and comparable to the total anthropogenic emissions from entire Middle Eastern countries such as Iraq, United Arabic Emirates and Kuwait.

The measurements took place in summer time. Considering the seasonality of the deep-water circulation, it is likely that the emissions to the atmosphere will be further enhanced during the wintertime.

In pre-industrial times, the underwater emissions of ethane and propane would have had insignificant implications to the regional air quality. Nowadays however, the marine traffic in the region emits high amounts of nitrogen oxides. These gases interact with the ethane and propane and result in the production of tropospheric ozone and peroxyacetyl nitrates. Both of these elements are very harmful to human health.

In the coming decades, ship traffic through the Red Sea and Suez Canal is expected to continue to increase strongly, with a concomitant rise in nitrogen oxide emissions. The scientists expect that such increase will amplify the role of this source, leading to significant deterioration of the regional air quality.

The measurements were taken during the AQABA (Air Quality and Climate Change in the Arabian Basin) ship campaign that took place in the waters around the Arabian Peninsula. The AQABA project is the first-ever in-situ comprehensive characterization of gaseous and aerosol processes in Middle East that took place between June and August 2017 and was led by Max Planck Institute for Chemistry in Mainz.

The ship traversed the Mediterranean Sea, the Suez Canal, the Red Sea, the northern Indian Ocean, and the Arabian Gulf, before returning by the same route, covering around 20 000 km at sea and yielding a rich dataset for the scientists.