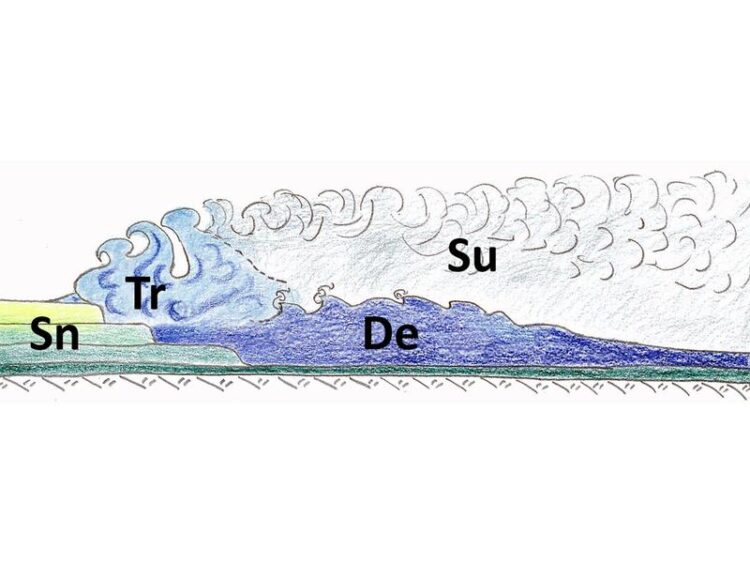 – what does this have to do with volcanoes?

Despite their differences, cold powder avalanches and hot pyroclastic flows during volcanic eruptions do have a number of things in common, not least their immense destructive power. Completely independently of one another, researchers from both fields have discovered that pulsating flows are responsible for the destructive power of these two natural hazards. A research project supported by the Swiss National Science Foundation is aiming to uncover the origin of this still unknown phenomenon.

Powder avalanches are the result of complex physical processes (see https://www.slf.ch/en/avalanches/avalanche-science-and-prevention/avalanche-type…). They essentially comprise three layers that interact with each other during an avalanche (see figure), namely a dense granular basal layer, an intermittency region in the form of a pulsating turbulent flow, and a thinner, turbulent suspension cloud of very fine particles (a powder cloud) covering the entire avalanche. With a view to understanding these processes and correctly anticipating the destructive power of avalanches, SLF researchers are using measuring instruments and sensors to look deep inside avalanches during experiments at the avalanche test site in the Vallée de la Sionne (Arbaz, canton of Valais) (see https://www.slf.ch/en/about-the-slf/instrumented-field-sites-and-laboratories/na…). Measurements recorded to date now indicate that high-energy pulses within a powder avalanche may be responsible for its destructive effect. These measurements also show that surges sweep through the dense basal layer and large coherent structures form in the intermittency region. These processes are closely linked to the destructive generation of pulses.

Volcanologists from New Zealand have come to the same conclusion: pyroclastic flows, i.e. hot currents of ash and gas produced during volcanic eruptions, also pulsate. Unlike powder avalanches, however, these flows are very hot, which makes them difficult to study. Nevertheless, large-scale experiments as well as direct measurements taken from inside the pyroclastic flows of the devastating eruption on New Zealand’s Whakaari/White Island on 9 December 2019 show that the turbulent and pulsating intermittency region is responsible for and exacerbates the destructive power of pyroclastic flows.

Researchers now want to investigate the origin of these destructive pulses and gain a better understanding of the physical mechanisms involved, harnessing to this end new technologies such as GEODAR and laboratory infrastructure that provide unprecedented insight into powder avalanches and pyroclastic flows. The modelling of complex flow behaviour has also improved considerably in recent years. Researchers are using as a basis data collected both at the SLF avalanche test site in the Vallée de la Sionne and during experiments with pyroclastic flows. This means that both avalanche and volcano researchers will benefit from the results of this research project, which is supported by the Swiss National Science Foundation. Thanks to new analytical models, both fields should see better protective measures emerge in the future.