How animals find their way 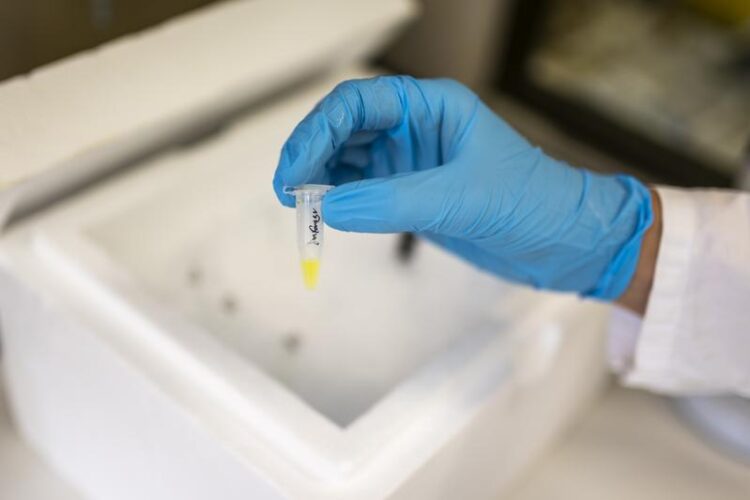 During the first phase of the CRC, researchers succeeded in demonstrating that the protein cryptochrome 4 (the yellowish substance in the tube) is magnetically sensitive. They produce the protein using bacterial cultures.
Credit: University of Oldenburg/Christina Kuhaupt

Collaborative Research Centre on magnetoreception and animal navigation at the University of Oldenburg has been awarded funding for another four years.

The astonishing navigational skills of birds, bats and fish and their ability to use the Earth’s magnetic field for orientation have been the focus of the Collaborative Research Centre “Magnetoreception and Vertebrate Navigation” at the University of Oldenburg for the last four years. The German Research Foundation (DFG) has now extended its funding for the project, and the Collaborative Research Centre (CRC), which is led by Oldenburg biologist Prof. Dr Henrik Mouritsen, will receive up to 9.2 million euros for a second funding period from 2023 to 2026.

With the official title “Magnetoreception and navigation in vertebrates: from biophysics to brain and behaviour” (SFB 1372), the CRC investigates the orientation abilities of vertebrates from all perspectives. In addition to the University of Oldenburg, the Institute of Avian Research Vogelwarte Helgoland (IAR) in Wilhelmshaven, the Freie Universität Berlin, the Ruhr-Universität Bochum and the Weizmann Institute of Science in Rehovot (Israel) are involved in the large-scale interdisciplinary project, which is designed to run for a total of twelve years. Three researchers from the University of Oxford (UK) are also affiliated with the CRC as Mercator Fellows.

“To achieve a breakthrough in understanding magnetoreception, a highly interdisciplinary approach is required. The enormously successful work of the Collaborative Research Centre in its first funding period proves that cooperation between leading international experts from different disciplines is necessary to attain the programme’s ambitious goals. The German Research Foundation’s extension of its funding is recognition of all that has been achieved so far and ensures that this fruitful research can continue,” said Professor Dr Ralph Bruder, President of the University of Oldenburg.

Researchers from the fields of neurobiology, quantum physics, biochemistry, computer modelling and behavioural biology are all working together in the Collaborative Research Centre “Magnetoreception”. The central aim is to gain a comprehensive, multidisciplinary understanding of the magnetic sense and navigation abilities in vertebrates – from the proteins that detect the magnetic signal, the signalling pathways inside nerve cells and the transmission of stimuli to the brain to the behaviour and migration routes of navigating animals. This knowledge can play an important role in the protection of endangered animal species that migrate across long distances. Moreover, the quantum mechanical mechanisms that seem to form the basis for magnetoreception could be used to develop improved sensors for technological applications.

The researchers are hot on the trail of a fascinating mechanism: in recent years, evidence has mounted that the magnetic sensor of migratory birds is located in their eyes. Their magnetic sense appears to be based on a complicated quantum physical process that takes place in certain retinal cells. In the first funding period, a team led by Mouritsen succeeded in producing a magnetically sensitive protein from the retina of European robins using bacterial cell cultures. With this protein the team and its collaborators in Oxford conducted numerous experiments. “We were able to show for the first time that a molecule from the visual apparatus of a migratory bird is magnetically sensitive,” says Mouritsen. In 2021, the researchers presented their findings in the prestigious scientific journal Nature.

Another highlight of the first funding period was the discovery by a team led by CRC subproject leader Professor Dr Onur Güntürkün from the Ruhr-Universität Bochum that the brains of birds –particularly the areas responsible for sensory perception – are far more similar to those of mammals than had been previously assumed. As the team reported in Science, the nerve fibres in the brains of birds form surprisingly complex structures.

Science also published another study from the project which showed that certain coordinates of the Earth’s magnetic field function as a stop sign for migratory birds. For this study, a team led by Dr Joe Wynn, then Oxford, now the Institute of Avian Research and involving Professor Mouritsen analysed “ringing” data – ¬obtained from numbered metal rings attached to the legs of birds across Europe – for the period from 1940 to 2018.

In further studies, the scientists made important advances towards understanding the biophysical processes involved in magnetoreception, the transmission of the magnetic stimulus within nerve cells in the eyes of birds, the effects of electrosmog on the migratory behaviour of birds living in the wild and the encoding of spatial information in the brains of bats. The CRC’s researchers published their findings in numerous journals, including nine articles which appeared in the renowned Nature and Science journals.
In the second funding period further studies focusing on magnetically sensitive proteins, which the team can now produce to suit its needs using cell cultures, are on the agenda. “The proteins of certain animal species seem considerably more sensitive to magnetic fields than those of other species,” Mouritsen explains. The team aims to modify these proteins and perform lab experiments and computer simulations to find out which parts of the molecules are key for magnetoreception.

Several sub-projects of the programme will focus on how magnetic stimuli and other information that plays a key role in navigation is processed in the brain. A new sub-project led by Oldenburg biologist Dr Oliver Lindecke is investigating the migration behaviour and magnetic orientation of pipistrelle bats, which cover thousands of kilometres on their migration routes. Another new addition to the CRC is the sub-project of Dr Sandra Bouwhuis, Scientific Director of the Institute for Avian Research, which is addressing the question of what impact the decision to spend the winter in a determined location has on the breeding success of migratory birds. Bouwhuis can draw on data from numerous individuals in a colony of common terns, some of which have been under observation for several decades and whose genealogical relationships are well documented and analysed.

The research programme also includes an integrated Research Training Group with which it actively promotes the doctoral projects of young scientists.