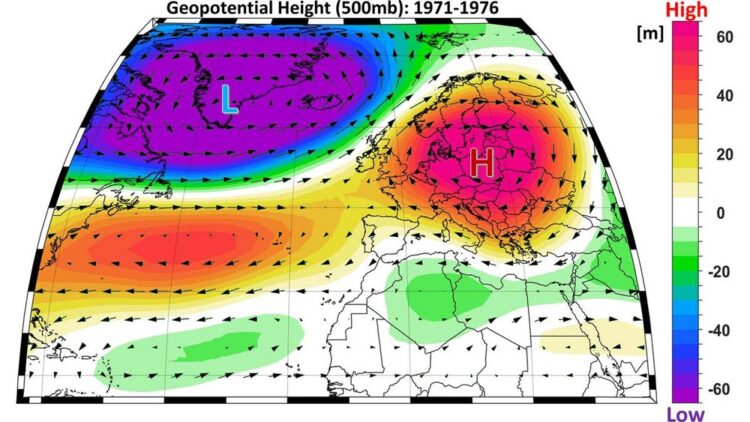 In the future, droughts could be even more severe than those that struck parts of Germany in 2018. An analysis of climate data from the last millennium shows that several factors have to coincide to produce a megadrought: not only rising temperatures, but also the amount of solar radiation, as well as certain meteorological and ocean-circulation conditions in the North Atlantic, like those expected to arise in the future.

A group of researchers led by the Alfred Wegener Institute have just released their findings in the journal Communications Earth & Environment.

Despite the precipitation this winter, which in some cases was considerable, many parts of Germany still haven’t recovered from the past three, extremely dry years; the forests and other vegetation are suffering as a result. Some have speculated that 2018 was the driest year in modern history. Yet a look at the climate data from the last millennium shows that this “record-breaking” year, just like the extremely dry years 2003 and 2015, was within the limits of natural variability. There were periods of extreme drought between the years 1400 and 1480, and between 1770 and 1840. However, they affected very different landscapes, with a much higher percentage of natural mixed forests, riparian zones and wetlands.

“We have to be prepared for the fact that, because of climate change, in the future Germany might experience extreme droughts that do enormous damage to our modern agriculture and forestry,” says Dr Monica Ionita-Scholz from the Alfred Wegener Institute, Helmholtz Centre for Polar and Marine Research (AWI). She and her team analysed historical data from the last millennium in order to reconstruct droughts. “In our study, for the first time we sought to identify the driving factors for droughts in Central Europe in the last millennium,” the climate expert explains. To do so, they used e.g. historical records on temperature, precipitation and the water levels in rivers, and analysed currents in the North Atlantic and atmospheric pressure patterns – two key factors that determine the weather. The study’s conclusion: there have repeatedly been megadroughts in Central Europe, whenever several factors coincided. The periods of extreme drought in the last millennium were characterised by a weak or negative phase of the Atlantic Multidecadal Oscillation, reduced solar radiation, and frequently occurring, stable atmospheric pressure systems over the central North Atlantic and North Sea.

“Right now, most forecasts for future drought scenarios are concentrating on the rising temperatures produced by anthropogenic climate change, together with aridity due to pronounced evaporation,” says Ionita-Scholz. “But if we want to prepare for the future, it’s imperative that we also take into account further natural and anthropogenic factors in our calculations.” The general consensus of the scientific community is that ocean circulation in the North Atlantic will likely weaken. If this comes to pass, and there is also a phase of reduced solar activity due to natural variability, the result could be decades-long megadroughts like those experienced in the last millennium – posing tremendous social and political challenges.

Due to the current coronavirus-based workplace regulations, the experts may be working from home. Accordingly, we ask that you please submit any interview requests by e-mail (with Communications and Media Relations in cc); we will call you back as soon as possible.

Printable images will be available in the online version of this press release when the embargo is lifted: https://www.awi.de/en/about-us/service/press.html