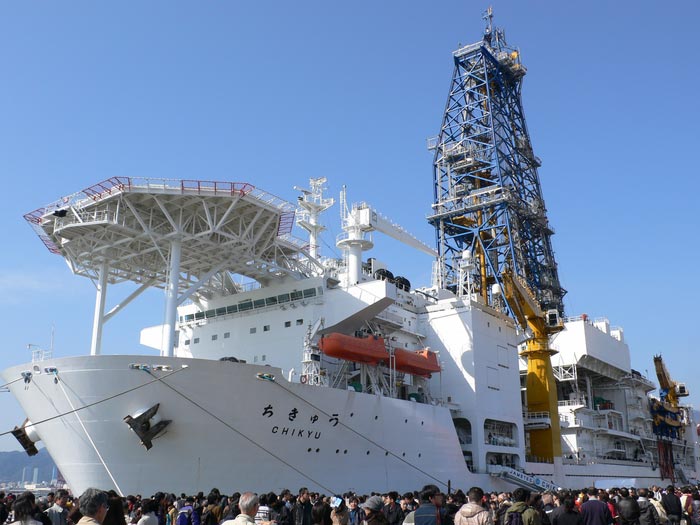 Scientists who drilled deeper into an undersea earthquake fault than ever before have found that the tectonic stress in Japan’s Nankai subduction zone is less than expected, according to a study from researchers at The University of Texas at Austin and University of Washington.

The findings, published in the journal Geology, are a puzzle because the fault produces a great earthquake almost every century and was thought to be building for another big one.

“This is the heart of the subduction zone, right above where the fault is locked, where the expectation was that the system should be storing energy between earthquakes,” said Demian Saffer, director of the University of Texas Institute for Geophysics (UTIG) who co-led the research and scientific mission that drilled the fault. “It changes the way we’re thinking about stress in these systems.”

Although the Nankai fault has been stuck for decades, the study shows that it is not yet showing major signs of pent-up tectonic stress. According to Saffer, that doesn’t alter the long-term outlook for the fault, which last ruptured in 1946 – when it caused a tsunami that killed thousands – and is expected to do so again during the next 50 years.

Instead, the findings will help scientists home in on the link between tectonic forces and the earthquake cycle and potentially lead to better earthquake forecasts, both at Nankai and other megathrust faults such as Cascadia in the Pacific Northwest.

“Right now, we have no way of knowing if the big one for Cascadia – a magnitude 9 scale earthquake and tsunami – will happen this afternoon or 200 years from now,” said Harold Tobin, a researcher at the University of Washington who is the first author of the paper. “But I have some optimism that with more and more direct observations like this, we can start to recognize when something anomalous is occurring and that the risk of an earthquake is heightened in a way that could help people prepare.”

Megathrust faults such as Nankai, and the tsunamis they generate, are among the most powerful and damaging on the globe, but scientists say they currently have no reliable way of knowing when and where the next big one will hit.

The hope is that by directly measuring the force felt between tectonic plates pushing on each other – tectonic stress – scientists can learn when a great earthquake is ready to happen.

However, the nature of tectonics means that the great earthquake faults are found in deep ocean, miles under the seafloor, making them incredibly challenging to measure directly. Saffer and Tobin’s drilling expedition is the closest scientists have come.

Their record-breaking attempt took place in 2018 aboard a Japanese scientific drilling ship, the Chikyu, which drilled 2 miles into the tectonic plate before the borehole got too unstable to continue, a mile short of the fault.

Nevertheless, the researchers gathered invaluable data about subsurface conditions near the fault, including stress. To do that, they measured how much the borehole changed shape as the Earth squeezed it from the sides, then pumped water to see what it took to force its walls back out. That told them the direction and strength of horizontal stress felt by the plate pushing on the fault.

Contrary to predictions, the horizontal stress expected to have built since the most recent great earthquake was close to zero, as if it had already released its pent-up energy.

The researchers suggested several explanations: It could be that the fault simply needs less pent-up energy than thought to slip in a big earthquake, or that the stresses are lurking nearer to the fault than the drilling reached. Or it could be that the tectonic push will come suddenly in the coming years. Either way, the researchers said the drilling showed the need for further investigation and long-term monitoring of the fault.

The research was funded by the Integrated Ocean Drilling Program and the Japan Agency for Marine-Earth Science and Technology. UTIG is a research unit of UT Austin’s Jackson School of Geosciences.