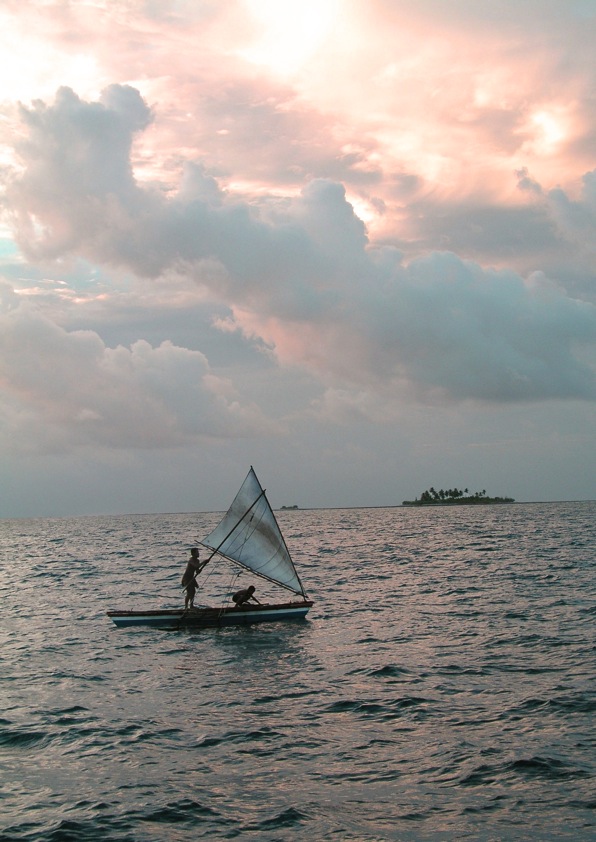 Photo courtesy J. Warren Beck In the equatorial atolls of western Kiribati in the Pacific Ocean, a coral record has revealed the importance of Pacific winds on global temperatures. New research has found that weak trade winds from 1910-1940 caused an increase in warming, while stronger winds 1940-1970 led to temperatures leveling off.

The study, led by scientists at the National Center for Atmospheric Research (NCAR) and the University of Arizona (UA), uses a novel method of analyzing chemical changes in coral to show that weak tropical Pacific trade winds coincided with globally warming temperatures early in the twentieth century. When the natural pattern shifted and winds began to strengthen after 1940, the warming slowed.

The finding gives support to the theory that strong Pacific trade winds are currently helping to prevent global temperatures from climbing, even as society continues to emit carbon dioxide and other greenhouse gases. When the winds weaken as part of a natural cycle, warming will likely resume once again, the authors say.

“Strong winds in the tropical Pacific are playing a role in the slowdown of warming over the past 15 years,” said lead author Diane Thompson, a postdoctoral scientist at NCAR. “When the winds inevitably change to a weaker state, warming will start to accelerate again.”

“Mother Nature is always going to inject little ups and downs along our path to a warmer world,” said University of Arizona professor Julia Cole, a co-author. “We’re trying to understand how those natural variations work so that scientists can do a better job of predicting the actual course of climate change into the future.”

The study is being published this week in Nature Geoscience. It was funded by the National Science Foundation, NCAR’s sponsor, as well as by the National Oceanic and Atmospheric Administration, University of Arizona, Philanthropic Education Organization, U.K. Natural Environment Research Council, and U.S. Department of Energy.

Despite increases in greenhouse gases, global surface temperatures have not risen significantly since 2001. This pause in global warming, often called the hiatus, has become the focus of research by climate scientists who are trying to track the missing heat.

By using climate models and observations, scientists are finding evidence that the heat is going into the subsurface ocean, perhaps as a result of changes in atmospheric circulation. A study earlier this year in Nature Climate Change, by an international team of climate scientists, pointed to unusually strong trade winds along the equator in the Pacific Ocean that are driving heat into the ocean while bringing cooler water to the surface. This is leaving less heat in the air, thereby temporarily offsetting warming from increasing greenhouse gases.

The study by Thompson and her colleagues indicates that this process has happened before, and in the opposite direction: weaker winds allowed warming to accelerate.

The research team focused on the early twentieth century – a time when a third of the century’s global warming took place, even though major accumulations of greenhouse gases were not yet occurring. Some previous research suggested that rising sea-surface temperatures in the Atlantic Ocean were to blame. That warming did not begin until the mid-1920s, however, when the global atmospheric warming was already well underway.

As it turned out, the researchers had access to an important piece of evidence. Sitting in a UA lab was an old core drawn from a coral skeleton near a western tropical Pacific island. It had been chemically analyzed in the 1990s and then largely forgotten.

Thompson, while working on her doctoral dissertation, realized that the core could reveal tropical Pacific wind patterns during the period from 1894 to 1982 when it had grown just outside of the island’s lagoon.

The reason has to do with the effects of wind on water chemistry. When strong bursts of wind came in from the west, they stirred up manganese in the sediment at the bottom of the lagoon. The local corals took up the manganese in their skeletons as they grew. Such wind bursts from the west occur more commonly when the trade winds, which normally blow from the east, are weak.

Chemical analysis of the yearly banded coral skeleton showed a comparatively high occurrence of these spikes in manganese to calcium from about 1910 to 1940—the same period when Earth experienced significant warming. However, the number of these events dropped between the 1940s and 1970s, when temperatures leveled off.

Thompson and her co-authors compared the ratio to wind observations since 1960, when observations became more reliable, and verified that the high manganese-to-calcium ratio correlated with weaker trade winds. They also combed through more scattered records before 1960 and again found a correlation of the chemical ratio to wind strength.

Thompson stressed that the winds are just one contributor to changes in global climate. Another reason that temperatures leveled off in mid-century likely has to do with increased industrialization and emissions of particles that block sunlight and exert a cooling influence. Later in the century, increased emissions of greenhouse gases played a dominant role.

“This research shows that the influence of winds on climate is not anything new. These mechanisms have been at work earlier,” Thompson said. “We believe this is a significant contribution to understanding the role of natural processes in modulating global temperature change.”