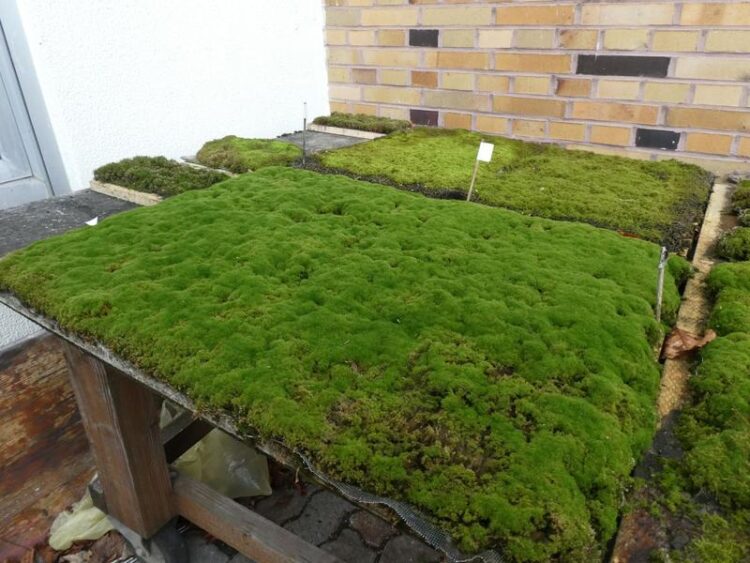 Favorable moss species grown in the greenhouse. This moss was the most effective at erosion control.
Photo: Corinna Gall

Every year, billions of tons of valuable soil are lost worldwide through erosion, much of it deposited in bodies of water that fill with sand or silt as a result. Soil losses measured in Germany range from 1.4 to 3.2 tons per hectare per year; in extreme weather, the figure can be as high as fifty tons. Geoscientists at the University of Tübingen have now shown how biological soil crusts provide a protective layer against erosion. Natural “carpets” of bacteria, mosses, lichens, fungi and other organisms bind soil particles into coherent layers, or crusts.

Biocrusts are only a few millimeters thick, but they stabilize the soil surface and protect it from erosion by rain and wind. So far, they have been studied mainly in dry regions, where they are particularly important because they store water and serve as protection against wind erosion and dust trapping. Under the direction of Dr. Steffen Seitz of Soil Science and Geomorphology, the Tübingen scientists investigated the development of biological soil crusts on recently used skid trails in the Schönbuch nature park near Stuttgart in southwest Germany.

These paths created by logging machines, along with forest roads and logged areas, are preferred habitats for biocrusts. Although they cause disturbance to the forest floor, they have the advantage of concentrating forestry operations on predetermined routes and protecting the forest areas in between.

The Tübingen team measured the soil composition on the trails and at other points on the site at different times over a year, and conducted experiments with rain simulators. The results show how important biocrusts are for soil conservation. “Soil erosion on the trails is, on average, thirteen times higher than on undisturbed forest soil across all locations and times of measurement,” says Professor Thomas Scholten, who supervises the project at Soil Science and Geomorphology. At the same time, however, the forest soil’s protective mechanisms were revealed. “For example, biological soil crusts that reduce erosion settled in the trails soon after they were no longer driven on.”

These developed very differently depending on their location, especially the mosses, which play a particularly important role in erosion control. Their share of the crust communities ranged from five to fifty percent, depending on the measuring point. The diversity of the moss species involved also varied greatly, due primarily to chemical differences in the soil. In general, the greater the diversity of species involved, the better the erosion protection provided by the biocrusts. They were also found to provide a foundation for further plant growth. During the summer months, many biocrusts on the trails were replaced by taller vegetation such as rushes, grasses, or tree seedlings, which also provided good erosion control.

In another experiment in cooperation with the Stuttgart-based company Reinhold Hummel, the researchers spread some trails with mats of a moss species grown in the greenhouse. Not only can that moss store a lot of water, it also proved to be the most vigorous and resistant of the 24 moss species tested. Moreover, since it can be applied like sod, it is particularly suitable for practical environmental protection. Most of these moss mats in the Schönbuch Nature Park have taken root after one year. “The research results we have obtained so far show that biocrusts are well suited for repairing and stabilizing surfaces. This is not only true for forest soils; mining landscapes and embankments are also possible areas of application,” says Thomas Scholten.