Home / Earth Sciences / Arctic mercury levels drop during the depths of the winter
22.08.2022

Arctic mercury levels drop during the depths of the winter 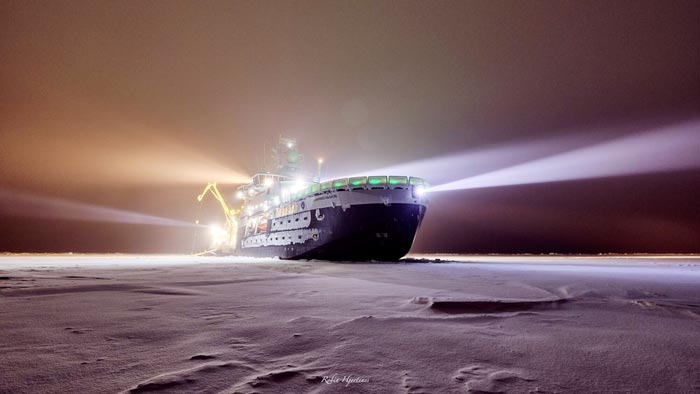 It used to be that researchers didn't study what happens in the Arctic during the polar night because it was difficult to work there. But over the past decade, researchers have ventured into this environment and have come up with surprising findings. Norway's research-dedicated icebreaker, Kronprins Håkon, launched in 2017, is an important tool for this research.
Credit: Robin Hjertnes

First-ever measurements of total mercury levels in the polar night uncovered a 33 per cent drop compared to summer levels.

Over the last decade, researchers have learned a lot about the polar night — discovering everything from how tiny marine critters migrate up and down in the sea in response to the weak light of the moon, to seabirds that dive into the pitch-black ocean to feast on bioluminescent plankton and krill.

But what is less well known is how the chemistry of Arctic Ocean water changes during this period, when the sun remains completely below the horizon for a full 24-hour day.

Now, in an article published in Nature Geoscience, Norwegian University of Science and Technology (NTNU) researchers report on a surprising trend they discovered in mercury levels in the ocean during the polar night.

“We found that total mercury concentrations in the Barents Sea decreased by about 33 percent from summer to winter,” said Stephen G. Kohler, a PhD candidate at NTNU’s Marine Chemistry and Biogeochemistry group in the Department of Chemistry, and first author of the article.

These measurements are the first-ever winter reports on this element in Arctic Ocean waters.They were conducted as a part of the Nansen Legacy Project, a 7-year-long collaborative between 10 Norwegian research institutions that involves studying the physical and biological aspects of the Barents Sea during all four seasons.

“Everything that we’ve done and know about the Arctic so far is entirely based on when we were allowed to go there, which was mostly in the summer,” Kohler said. “And the fact that now we have a snapshot of what’s happening during the dark period gives us more insight into the entire mercury cycle.”

The problem with mercury

What happens with mercury levels in the Arctic matters because a specific toxic form of mercury, called methylmercury, can find its way into the food web.This poses risks to the health of animals at the top of the food chain, such as polar bears, and to northern indigenous people who consume contaminated fish and seals as a regular part of their diets.

But what Kohler and his colleagues are interested in is far more fundamental than this — they want to know the basic mechanisms by which mercury moves around in Arctic waters.

As the planet warms over the next decades, more and more permafrost will melt, releasing more mercury to Arctic waters. That makes it important to understand how the element behaves, in all its different forms, and throughout the year, Kohler said.

Kohler and his colleagues observed higher mercury levels in surface seawater during the summer because the sun is up and everything has thawed, from sea ice to rivers, all of which can deliver mercury to the ocean.

“It’s warmer in the summer. So there’s more river water coming in, light in the atmosphere, and therefore, there’s more mercury coming in,” Kohler said.

So you might expect that during the winter, when the Arctic is dark and frozen, mercury values would stay the same, since all the inputs have been stopped. But what Kohler and his colleagues saw, a 33 per cent drop in total mercury amounts compared to summer values, made them look for an explanation.

Kohler and his colleagues, including postdoc Nicolas Sanchez, were also measuring levels of other metals in ocean water, including iron and manganese.

And what they found was that manganese levels also decreased in the winter. In seawater, manganese can form small particles which then attract the mercury that’s in the seawater, in a process called scavenging.

These particles can become heavy enough to sink to the bottom of the sea. The researchers suggested that these particles are responsible for taking the mercury to deeper waters and sediments.

“Scavenging is when the particles are essentially just grabbing mercury from the water and taking it along for the ride,” Kohler said.

While this scavenging removes mercury from surface layers, it means increases in  mercury in sediments, where it is brought by the manganese particles.

More toxic mercury in the future

Once mercury reaches ocean sediments, it can be acted on by bacteria living in the sediments. These bacteria can transform mercury into its toxic form, methylmercury.

All this means that more toxic mercury could find its way into Arctic food webs, Kohler said.

“In the future, rising temperatures caused by climate change will enable more mercury to be released from mercury-rich permafrost around the Arctic circle during the summer,” he said. “This mercury is delivered to the Arctic Ocean via rivers. As a result, increasing amounts of mercury in surface waters indicate increasing amounts of mercury descending to the depths in winter, potentially resulting in more toxic methylmercury formation in the future Arctic Ocean.”