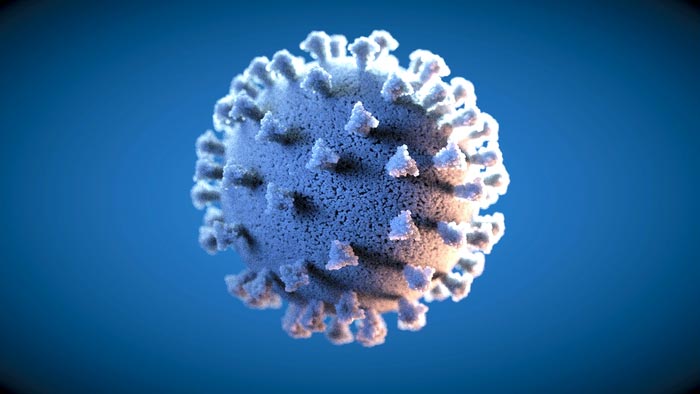 Three natural compounds present in foods like green tea, olive oil and red wine are promising candidates for the development of drugs against the coronavirus. In a comprehensive screening of a large library of natural substances at DESY’s X-ray source PETRA III the compounds bound to a central enzyme vital for the replication of the coronavirus. All three compounds are already used as active substances in existing drugs, as the team headed by Christian Betzel from the University of Hamburg and Alke Meents from DESY reports in the journal Communications Biology. However, if and when a corona drug can be developed on the basis of these compounds remains to be investigated.

“We tested 500 substances from the Karachi Library of Natural Compounds if they bind to the papain-like protease of the novel coronavirus, which is one of the main targets for an antiviral drug,” explains the study’s main author Vasundara Srinivasan from the University of Hamburg. “A compound that binds to the enzyme at the right place can stop it from working.”

The papain-like protease (PLpro) is a vital enzyme for virus replication: When a cell is hijacked by the coronavirus, it is forced to produce building blocks for new virus particles. These proteins are manufactured as a long string. PLpro then acts like a molecular pair of scissors, cutting the proteins from the string. If this process is blocked, the proteins cannot assemble new virus particles.

“However, PLpro has another vital function for the virus,” says Srinivasan. “It blocks a protein of the immune system, called ISG15, and that severely weakens the cell’s self-defense. With inhibiting PLpro we can also enhance the cell’s immune response.”

For the experiments, PLpro was mixed with each of the 500 natural substances in a solution, giving them the chance to bind to the enzyme. It is not possible to see if a substance binds to the enzyme with a conventional light microscope. Instead, tiny crystals were grown from the mixtures. When illuminated with the bright X-rays from PETRA III at the experimental station P11, the crystals produced a characteristic diffraction pattern from which the structure of the enzyme can be reconstructed down to the level of individual atoms. “From this information we can produce 3-dimensional models of the enzyme with atomic resolution and see if and where a substance binds to it,” explains Meents.

The screening showed that three phenols  bind to the enzyme: hydroxyethylphenol (YRL), isolated for the experiments from the henna tree Lawsonia alba, is a compound present in many foods such as red wine and virgin olive oil and used as anti-arrhythmia agent. Hydroxybenzaldehyde (HBA) is a known anti-tumor agent and accelerates wound healing. It was isolated from the copperleaf Acalypha torta. Methyldihydroxybenzoate (HE9), isolated from the French marigold Tagetes patula, is an anti-oxidant with anti-inflammatory effect and is found in green tea.

In subsequent lab tests, established and performed by Hévila Brognaro in Betzel’s group, the three phenols reduced PLpro’s activity by 50 to 70 per cent in living cells. “The advantage of these substances is their proven safety,” says Betzel, who is also a member of the cluster of excellence CUI: Advanced Imaging of Matter. “These compounds naturally occur in many foods. However, drinking green tea will not cure your corona infection! Like it will not heal your wounds or cure your cancer. If and how a corona drug can be developed from these phenols is subject to further studies.”

In a different screening, a team consisting largely of the same scientists had already screened thousands of existing drugs at PETRA III as possible inhibitors of the coronavirus’ main protease (Mpro), also a molecular pair of scissors and a main potential drug target. The screening identified several corona drug candidates, and the most promising have entered preclinical testing. “The corona initiative from DESY and University of Hamburg is one of the very few worldwide that investigated both of Covid-19’s main targets,” emphasises Betzel.

A comprehensive animation that DESY produced together with the award-winning Science Communication Lab illustrates the principles of this research in detail using the example of the coronavirus’ main protease Mpro: https://youtu.be/Upb-nETh584

DESY is one of the world’s leading particle accelerator centres and investigates the structure and function of matter – from the interaction of tiny elementary particles and the behaviour of novel nanomaterials and vital biomolecules to the great mysteries of the universe. The particle accelerators and detectors that DESY develops and builds at its locations in Hamburg and Zeuthen are unique research tools. They generate the most intense X-ray radiation in the world, accelerate particles to record energies and open up new windows onto the universe. DESY is a member of the Helmholtz Association, Germany’s largest scientific association, and receives its funding from the German Federal Ministry of Education and Research (BMBF) (90 per cent) and the German federal states of Hamburg and Brandenburg (10 per cent).