A fortress of ice and snow 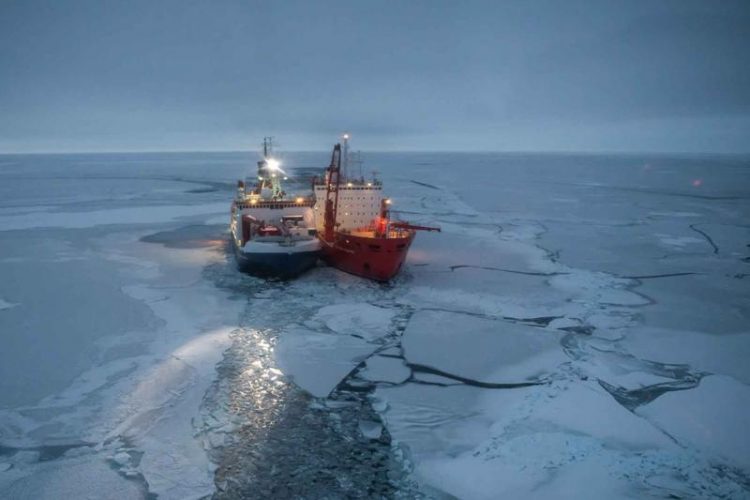 After only a few days of searching, experts from the MOSAiC expedition have now found a suitable ice floe, where they will set up the research camp for their one-year-long drift through the Arctic Ocean. Consequently, one of the most important milestones in the expedition has been reached ahead of schedule, and before the Polar Night falls.

Nevertheless, the search, which involved satellite imagery, two icebreakers, helicopter flights and scouting missions on the surface of the ice, was an enormous challenge – partly because, after the warm summer, there were very few sufficiently thick floes in the expedition’s start region.

The die is cast: The MOSAiC team has now selected the floe that will serve as the base of operations for their one-year-long ice drift around the North Pole with the German research icebreaker Polarstern.

This was preceded by an intensive search combining satellite imagery and helicopter flights over the target area in the Central Arctic, which were supported by the icebreaker Akademik Fedorov, operated by Russia’s Arctic and Antarctic Research Institute (AARI).

The participating researchers closely examined 16 floes that, on the basis of satellite imagery, were potentially large enough to accommodate the ice camp. They subsequently met on board Polarstern to compare their findings, ultimately agreeing that the ice drift should be prepared for on a floe measuring roughly 2.5 by 3.5 kilometres, and located at 85 degrees north and 137 degrees east. The floe, which Polarstern will allow herself to become frozen to, is currently drifting in alternating directions, at up to 10 kilometres per day.

“After a brief but intensive search, we’ve found our home for the months to come. The ice floe is characterised by an unusually stable area, which we are confident can serve as a good basis and point of departure for establishing a complex research camp. Other parts of the floe are typical of the new Arctic, which is home to thinner, less stable ice. And precisely this combination makes it very well suited to our scientific projects.

After carefully reviewing all relevant data, including that from our Russian partners, we came to the conclusion: it may not be the perfect floe, but it’s the best one in this part of the Arctic, and offers better working conditions than we could have expected after a warm Arctic summer,” explains MOSAiC expedition leader Markus Rex from the Alfred Wegener Institute, Helmholtz Centre for Polar and Marine Research (AWI).

“We’ll have to wait and see if it’s also stable enough to withstand the autumnal storms that are now brewing. But we’re prepared for all scenarios,” he adds.

On 28 September the first researchers from Polarstern set foot on the floe, which had long been a preferred candidate thanks to the promising analyses of the satellite data. On the radar images produced by the satellites, the dark, nearly oval floe stood out thanks to a large, bright region in its northern section. This clearly set it apart from all of the other potential floes, which were consistently dark in the radar images.

In the meantime, the experts have dubbed this region ‘the fortress’: made up of highly compressed, several-metre-thick ice, it offers higher stability and a solid basis for the ice camp, which will be erected far above it. In contrast, the darker regions, which are riddled with frozen-over meltwater pools and thin, porous and less stable ice, are typical representatives of the ice conditions in the new Arctic.

Here the ice thickness is ca. 30 centimetres near the freshly frozen-over pools, and between 60 and 150 centimetres in the older ice between them, although here, too, the bottommost 30 to 40 centimetres of the ice are extremely porous and less stable.

The researchers were unable to determine the floe’s makeup using satellite imagery alone; it took several days and nights of intensive work on the floe itself to gather the requisite data for making a sound choice. In this context, they used an electromagnetic sensor, which they hauled over the ice on foot or with a Skidoo, to map the ice thickness. Ice core samples also yielded data to help assess the ice’s structure.

Working in the dark, and in unfamiliar territory, posed a serious challenge. These efforts were coordinated and monitored with infrared cameras from Polarstern’s bridge. Further, members of the expedition’s polar bear patrol accompanied the researchers on the ice to ensure their safety.

In a final step, a helicopter-mounted laser scanner was used to create a three-dimensional model of the floe’s surface. This map, created during the scouting phase, will help the experts plan the next step: setting up the ice camp. Time won’t be on their side: starting today, the sun will no longer rise over the horizon, and there will only be a few more days with partial light at noon.

The MOSAiC expedition, spearheaded by the Alfred Wegener Institute, Helmholtz Centre for Polar and Marine Research (AWI) entails a number of unprecedented challenges. The project has an overall budget of ca. 140 million euros. In the course of the one-year-long drift, ca. 300 experts hailing from 17 countries will be on board. Their common goal: to investigate for the first time the entire climate system in the Central Arctic. To do so, they will gather data on five major aspects – Atmosphere, Sea Ice, Ocean, Ecosystem and Biogeochemistry – in an effort to better understand the interactions that shape the Arctic climate and life in the Arctic Ocean.

You can find the latest news directly from the Arctic on the MOSAiC channels on Twitter (@MOSAiCArctic) and Instagram (@mosaic_expedition) under the hashtags #MOSAiCexpedition, #Arctic and #icedrift.

For further information on the expedition, please visit: www.mosaic-expedition.org

Or you can use the MOSAiC web app to follow Polarstern’s drift route live: follow.mosaic-expedition.org.

Printable images are available in the online version of this press release: https://www.awi.de/en/about-us/service/press/press-release/a-fortress-of-ice-and…