Can we peek at Schrödinger's cat without disturbing it? 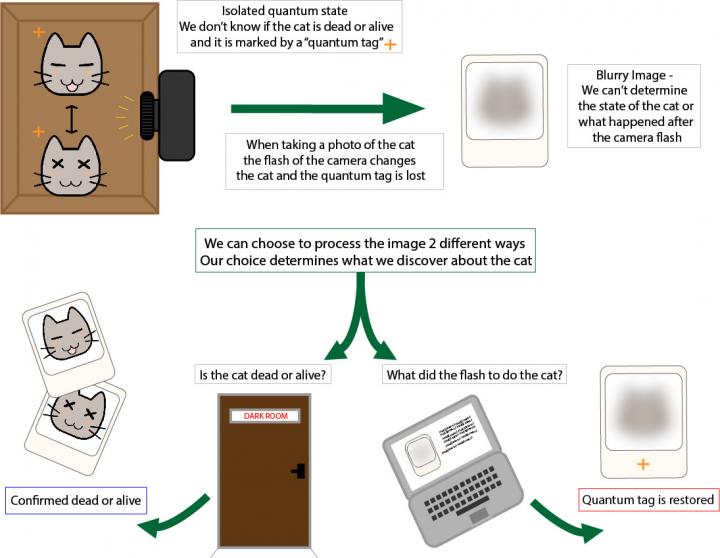 Since the cat in the box (top left) is in a superposition that means it can be in numerous different states (e.g. dead and/or alive) and is marked with a quantum tag. The photo taken of the cat is entangled with the situation inside of the box. We can decide the fate of the cat by processing the photo in a certain way (bottom left), or we can keep it in superposition by restoring the quantum tag using a different process (bottom right). Credit: Associate Professor Holger F. Hofmann and Emma Buchet/Hiroshima University

Quantum physics is difficult and explaining it even more so. Associate Professor Holger F. Hofmann from Hiroshima University and Kartik Patekar from the Indian Institute of Technology Bombay have tried to solve one of the biggest puzzles in quantum physics: how to measure the quantum system without changing it?

Their new paper published this month has found that by reading the information observed from a quantum system away from the system itself researchers can determine its state, depending on the method of analysis.

Although the analysis is completely removed from the quantum system, it is possible to restore the initial superposition of possible outcomes by a careful reading of the quantum data.

“Normally we would search for something by looking. But in this case looking changes the object, this is the problem with quantum mechanics. We can use complicated maths to describe it, but how can we be sure that the mathematics describes what is really there? When we measure something there is a trade-off and the other possibilities of what it could be are lost. You cannot find out about anything without an interaction, you pay a price in advance.” explains Hofmann.

During Patekar's month-long stay at Hiroshima University when he was an undergraduate student, the two physicists tried to imagine ways of measuring the system without “paying the price” i.e. keeping the system's superposition or meaning that the system can exist in all states. In order to understand their results Hofmann describes their findings using the well-known physics story of Schrödinger's cat:

The flash from the camera has also removed a “quantum tag” marking the superposition of the cat. This photo is now entangled with the fate of the cat i.e. we can decide what happened to the cat by processing this photo in a certain way.

The photo could then be taken away from the box and processed on a computer or in a darkroom. Depending on what method is used to process the photo, we can find out either if the cat is alive or dead, or what the flash did to the cat, restoring the quantum tag.

The choice of the reader determines what we know about the cat. We can find out if it's dead/alive or restore the quantum tag that was removed when the picture was taken, but not both.

This is only a step forward in our understanding of quantum mechanics. Today its full application remains confined to expert-level systems like quantum computers, although some of its aspects can also be used in precise measurements, and for secure communication using quantum cryptography.

“This is a key part of my research. I really wanted to understand why this quantum weirdness is there. I focused on measurements because that's where the weirdness comes from!” says Hofmann.