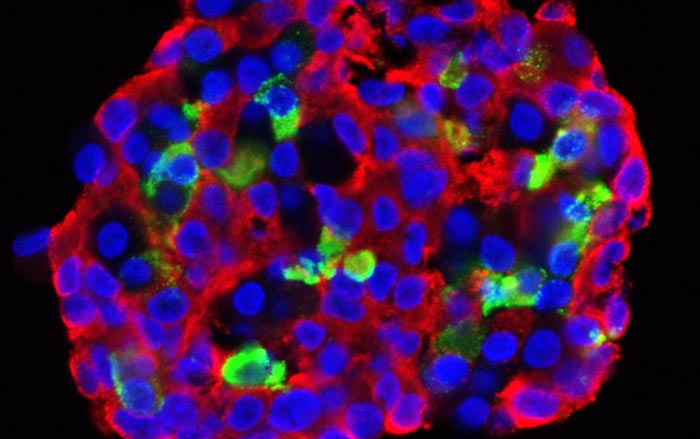 Sequencing the human genome — a feat accomplished in 2003 — provided the list of ingredients that make up a human being, but not the instructions that explain how those ingredients are used by each cell type to create complex “meals.” In other words, just because we know the sequence of DNA in a cell, it doesn’t necessarily mean we know how those instructions inform cell function, or how genetic variations influence function and disease risk.

To help bridge the gap between genotype (DNA sequence) and phenotype (cell behavior), the National Human Genome Research Institute, part of the National Institutes of Health, has launched a new Impact of Genomic Variation on Function Consortium.

As part of the new program, University of California San Diego School of Medicine researchers will receive $6.4 million in grant funding to study how external signals and genetic variations influence the behavior of one cell type in particular: insulin-producing beta cells in the pancreas.

“We plan to develop a roadmap of genetic variations, relevant in beta cells, to predict changes in insulin output — important information that may better enable us to prevent and treat diabetes,” said team lead Maike Sander, MD, professor and director of the Pediatric Diabetes Research Center at UC San Diego School of Medicine.

Beta cells produce the hormone insulin in response to increased sugar levels in the blood, as happens after a meal. Insulin helps other cells take up and use sugar for energy.

In type 1 diabetes, a person’s own immune system mistakenly attacks beta cells, so they don’t produce insulin. In type 2 diabetes, beta cells don’t produce enough insulin and other cells stop responding to it. In both cases, high amounts of sugar left to circulate in the blood can damage the circulatory, nervous and other body systems. It’s a careful balance, though — if beta cells produced too much insulin, there would be too little blood sugar left to keep a person alive.

The team previously built human stem cell-based beta cell models in the lab and genomic maps detailing how various beta cell genes are regulated. They can also use CRISPR gene editing to recapitulate gene variants that may affect insulin production and secretion.

With the new funding, the team will use their beta cell models to detail how external signals determine insulin output. They’ll look at 10 different stimuli known to modify insulin secretion, including sugar, other nutrients and food-dependent hormones, and determine how the beta cell genome and insulin release change in response to those stimuli over various lengths of time.