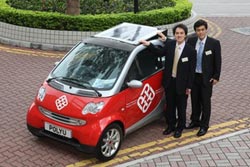 Great news for drivers! They can now continue to keep the air-conditioning system on during the hot sunny days even when they stop the vehicle and switch off the engine. In collaboration with Green Power Industrial Ltd, PolyU's Department of Electrical Engineering has developed an innovative air-conditioning system for vehicles that can turn scorching summer heat into cool air without a single drop of gasoline.

Motorists are so used to turn on the engine for air-conditioning. Our solar-powered air-conditioning system for vehicles (SAV) will break this convention. Featuring photovoltaic technology and intelligent power control, SAV switches on-board air-conditioner to solar power when petrol engine shuts off, and the switch-over is automatic and seamless.

Principal investigator of this project Prof Eric Cheng explained, “Drivers of minibuses or taxis can now switch off the engine but continue to stay cool while waiting for passengers at the station. In fact, our system helps extend the operation of air-conditioner for two more hours.” Prof Cheng further stressed that this device can also give good power output even during cloudy or rainy days.

Similar to a big solar charger, this system has solar photovoltaic panels on the rooftop of the vehicle to collect power for storage in a battery to support a stand-alone electric air-conditioning unit when the car engine is not running. The solar panel is made from bendy materials which can fit perfectly on any vehicle rooftop, giving it a sleek appearance. It also serves as a good thermal insulation for the interior and other valuable equipments inside the vehicle.

Idling not only pollutes the air, but is also bad for the engine as it may contaminate engine oil and accelerate the deterioration of engine components due to higher operational temperature and unnecessary prolonged operation. According to recent statistics, leaving a vehicle on idle for as short as 10 minutes a day will consume an average of 100 litres of petrol in one year [1]. In other words, adopting our SAV can help save drivers' petrol and fuel cost.

PolyU's President Prof Timothy W. Tong hailed the device as a practical solution that could benefit thousands of professional drivers and pedestrians in the city. The installation of our SAV on a Swire Coca-Cola Hong Kong truck was first announced in October last year. A series of testing on the road have proven the system robust and effective. To make another milestone on the road to green transport, the system is now being widely deployed in public transport such as minibuses and taxis, as well as some commercial vehicles including an operation truck of the Airport Authority Hong Kong.

“We look forward to having more fruitful collaboration with Green Power Industrial Ltd and other industrial partners to build a low-carbon city. Together, we can jointly make a contribution for sustainable development of our community,” said Prof Tong.

As part of an on-going mission in advancing technology that safeguards natural resources and our ecosystem, SAV is the latest from a stream of PolyU's green innovations with an aim to reduce harmful emissions and eliminate the effects of climate change. This system has also brought home two international awards from the 39th International Exhibition of Inventions of Geneva in April this year. This accolade will certainly serve as recognition of the hard work, the know-how and the dedication that PolyU researchers have put in creating meaningful innovations that move us towards a sustainable society.