Home / Life Sciences and Chemistry / Genome of the brown bear is now sequenced – scientists hope to learn about adaptations to climate
12.10.2011 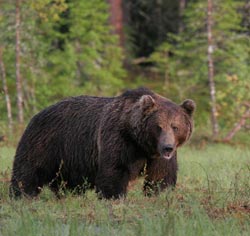 Research Centre (BiK-F) in Frankfurt am Main has just finished sequencing the genome of the brown bear. The work was done in collaboration the Norwegian research institute Bioforsk and the Chinese genome-sequencing institute BGI.

The researchers will now compare the brown bear sequence to the recently released genome sequences of polar bear and giant panda. The brown bear genome could ultimately be the key to identify genes that are relevant for environmental adaptation.

He is truly a mighty one – the brown bear is, together with the polar bear, the world's largest living land predator. In one of the first German mammalian genome projects, its genetic make-up, the genome, has now been sequenced. The “pilot bear” as he is nicknamed, was a male brown bear from the Pasvik Valley, Northern Norway and its genome is a spark for new research on this species. One of the partners, the Chinese genome center BGI, had also recently released the genome of the polar bear. Prof. Dr. Axel Janke, BiK-F, head of the research team, says: “With the entire genome sequences of those two bears, we have an incredible resource at hand to understand the genetic basis of adaptation to different climates. The genome sequences will also prove an invaluable resource to study other aspects of bear biology, and will help us to better understand and protect those fascinating animals.”

The particular significance of the brown bear genome springs from the bear’s close relationship to the polar bear – the flagship species of climate change. Recent studies at BiK-F show that the two bears diverged from each other less than a million years ago and the species are much older than previously thought “Thus, comparing their genomes will tell much about how they managed to adapt to different climates”, as Prof. Dr. Axel Janke (BiK-F) points out: “They are a terrific study system to understand what genetic make-up allows a mammal to survive under arctic or temperate climate conditions. Comparative genomics has already taught us a lot about evolutionary processes in humans, Neanderthals and chimpanzees. Now the bears will be the second mammalian group where the whole genomes of very close relatives can be studied and our“pilot bear” will become immortal.”

The brown bear genome is just the starting point for a series of genome research projects on this species, as Janke further explains: “The entire history of the brown bear is written in its genome and it will take years to completely decipher it. Even in humans, with several complete genomes and several millions of other sequences and medical data being available, the genome research has only just begun. However, comparative genomics is immensely profiting from this field.”

The brown bear genome will not only be useful to study climate adaption, but also for conservation aspects. “The data will allow the development of new genetic markers that are urgently needed for conservation and wildlife management”, says Dr. Hans-Geir Eiken from Norwegian Bioforsk. The institute closely monitors Scandinavian and Russian bear populations. While a number of studies have looked at maternally inherited mitochondrial DNA to study the population history and migration patterns of females, no relevant markers from the Y-chromosome are available to study male migration. The genome of the male brown bear will now enable such studies. “Many previous mammalian genomes came from females and were thus missing Y-chromosome sequences”, Dr. Eiken points out. He and his colleagues are eager to start the work, once the initial assembly and genome analyses have been completed.

A complete mammalian genome is also a rich resource for countless follow-up studies by evolutionary biologists and geneticists. For instance, mammalian genomes consist to a large part of non-coding sequences, so-called ”jumping genes” (transposable elements). Transposable elements typically account for one third to half of a mammalian genome and have a yet unknown impact on gene function, evolution and adaptation, because until now most studies looked at single loci of genes rather than whole genomes of species that are closely related.

For studying the vast amount of data and complexity of this and other questions, Janke’s BiK-F research team consists of experts in the fields of bioinformatics, population genetics and the genetics of transposable elements. Together with Bioforsk, among others, the data are currently being analyzed and the first results are expected shortly. Next to Janke and Eiken, the research is conducted by Dr. Björn Hallström, Dr. Frank Hailer, Dr. Maria Nilsson, Verena Kutschera and Vikas Kumar from BiK-F as well as Bioforsk scientists Alexander Kopatz, Dr. Oddmund Kleven and Dr. Snorre Hagen.