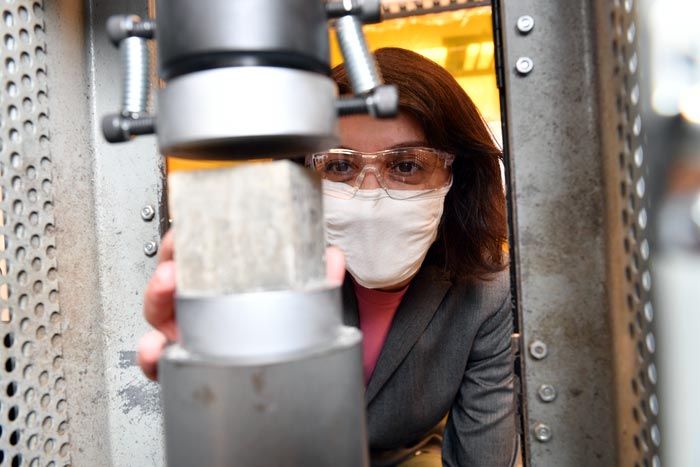 Putting nanoparticles from shrimp shells into cement paste made the material significantly stronger — an innovation that could lead to reduced seafood waste and lower carbon emissions from concrete production.

Reporting in the journal Cement and Concrete Composites, a team of Washington State University and Pacific Northwest National Laboratory researchers created nanocrystals and nanofibers of chitin, the second most abundant biopolymer in nature, from waste shrimp shells. When these tiny bits of chitin, which are about 1,000 times smaller than a human hair, were added to cement paste, the resulting material was up to 40% stronger. Set time for the cement, or how long it takes to harden, was also delayed by more than an hour, a desired property for long-distance transport and hot weather concrete work.

“The concrete industry is under pressure to reduce its carbon emissions from the production of cement,” said Somayeh Nassiri, an associate professor at the University of California, Davis, who led the research at WSU. “By developing these novel admixtures that enhance the strength of concrete, we can help reduce the amount of required cement and lower the carbon emissions of concrete.”

Concrete is used around the world in critical infrastructure such as building, bridges and roads. It is the most used material on earth after water. Cement production is carbon intensive, requiring the use of fossil fuels to reach the required high temperatures (1500°C). The limestone used in its production also goes through decomposition that produces additional carbon dioxide. Cement production comprises about 15% of industrial energy consumption and about 5% of total greenhouse gas emissions worldwide. High consumption of the material is also partly driven by the challenge of durability — concrete cracks easily and must be repaired or replaced often, says Nassiri.

Meanwhile, seafood waste is a significant problem for the fishing industry, which generates between 6 million and 8 million pounds of waste annually worldwide. Most of that waste is dumped into the sea, says Hui Li, research assistant professor in WSU’s Composite Materials and Engineering Center and a corresponding author on the paper.

“In the current world, dealing with climate change through the circular economy, we want to use waste materials as much as possible. One person’s waste is another person’s treasure,” he said.

Researchers have worked to improve concrete with a similar common biopolymer, cellulose. Sometimes cellulose additives would help the concrete, and sometimes they wouldn’t. The researchers were flummoxed as to why.

In their work, the WSU team studied the chitin materials at the nanoscale. Crab, shrimp and lobster shells are made up of about 20-30% chitin with much of the rest being calcium carbonate, another useful additive for cement. Compared to cellulose, chitin at the molecular scale happens to have an additional set of atoms — a functional group — that allows the researchers to control the charge on the surface of the molecules and, consequently, how they behave in the cement slurry.

“Being able to control the charge on the surface is an important piece to controlling how they function in cement. We could do that quite simply on the chitin because of the carboxyl group that sits in the chitin polymer,” said WSU Regents Professor Michael Wolcott, a corresponding author on the paper.

The success in strengthening the cement paste came down to how the particles suspend themselves within the cement slurry and how they interact with the cement particles.

As they added the processed nanocrystals of chitin to the cement, they were able to improve and target its properties, including its consistency, the setting time, strength and durability. They saw a 40% increase in strength in how the concrete can bend and a 12% improvement in the ability to compress it.

“Those are very significant numbers,” Wolcott said. “If you can reduce the amount that you use and get the same mechanical function or structural function and double its lifetime, then you’re able to significantly reduce the carbon emissions of the built environment.”

The researchers are now hoping to scale up the work to begin producing the additive at large scales. The research also needs to continue to achieve the same level of enhancements seen at the cement paste scale at the concrete scale.

In addition to the WSU researchers, the interdisciplinary team included researchers from Pacific Northwest National Laboratory. The work was funded by the Department of Energy’s Advanced Research Projects Agency-Energy (ARPA-E) program which supports innovative and unconventional energy technology projects that could lead to disruptive technologies.