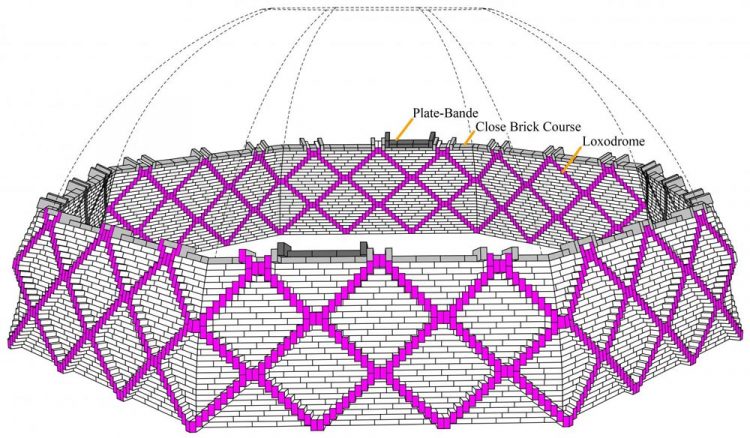 The double loxodrome technique is comprised of rows of vertical herringbone bricks that spiral around the dome and are filled in by horizontal field bricks. Effectively, each course of bricks creates a structural element known as a plate-bande or flat arch that wedges interior bricks between the vertical end caps to distribute load throughout the structure. Credit: Vittorio Paris and Attilio Pizzigoni, University of Bergamo; Sigrid Adriaenssens, Princeton University

Sigrid Adriaenssens, professor of civil and environmental engineering at Princeton, collaborated on the analysis with graduate student Vittorio Paris and Attilio Pizzigoni, professor engineering and applied sciences, both of the University of Bergamo.

Their study is the first ever to quantitatively prove the physics at work in Italian renaissance domes and to explain the forces which allow such structures to have been built without formwork typically required, even for modern construction.

Previously, there were only hypotheses in the field about how forces flowed through such edifices, and it was unknown how they were built without the use of temporary structures to hold them up during construction.

For Adriaenssens, the project advances two significant questions. “How can mankind construct such a large and beautiful structure without any formwork–mechanically, what's the innovation?” she asked. Secondly, “What can we learn?” Is there some “forgotten technology that we can use today?”

The detailed computer analysis accounts for the forces at work down to the individual brick, explaining how equilibrium is leveraged. The technique called discrete element modelling (DEM) analyzed the structure at several layers and stages of construction.

A limit state analysis determined the overall equilibrium state, or stability, of the completed structure. Not only do these tests verify the mechanics of the structures, but they also make it possible to recreate the techniques for modern construction.

Applying their findings to modern construction, the researchers anticipate that this study could have practical applications for developing construction techniques deploying aerial drones and robots. Using these unmanned machines for construction would increase worker safety, as well as enhance construction speed and reduce building costs.

Another advantage of unearthing new building techniques from ancient sources is that it can yield environmental benefits. “The construction industry is one of the most wasteful ones, so that means if we don't change anything, there will be a lot more construction waste,” said Adriaenssens, who is interested in using drone techniques for building very large span roofs that are self-supporting and require no shoring or formwork.

“Overall, this project speaks to an ancient narrative that tells of stones finding their equilibrium in the wonder of reason,” said Pizzigoni, “from Brunelleschi's dome to the mechanical arms of modern-day robotics where technology is performative of spaces and its social use.”

We play ping pong with the tree