Home / Architecture and Construction / Could Clay Buildings on Mars Become a Reality?
17.02.2021

Could Clay Buildings on Mars Become a Reality? 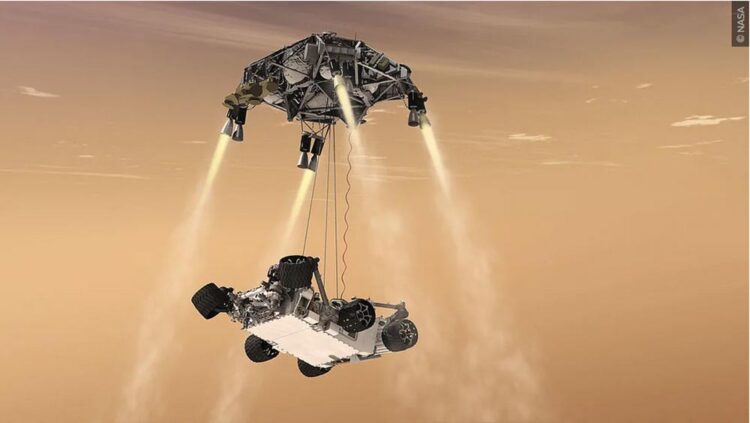 The Mars Rover Perseverance is set down with a special transport device.
(c) NASA

On 18 February 2021, the Mars 2020 Mission will finally land on the Red Planet. The Mars Perseverance Rover is scheduled to touch down at Jezero Crater, a large crater which scientists believe was once a lake. If there ever was any life on Mars, proof could be found here due to the previous habitable conditions provided by the water.

The rover will pursue a number of scientific objectives, including looking for signs of previous habitability. On the basis of satellite observations of the planet, we already know that the crater contains high levels of clay minerals, just as on Earth. Such clay minerals have been the focus of research for many years at TU Berlin’s Chair of Advanced Ceramic Materials, led by Professor Dr. Aleksander Gurlo.

“When compared to the construction materials used throughout the history of human civilization on Earth, the lack of organic materials such as plants presents a significant challenge. The only solid building materials available for early in situ resource utilization on Mars are regolith and rock. In our most recent publications we were able to demonstrate that the minerals on Mars, such as felsic rock, can transform into phyllosilicates (clay minerals) in the presence of water,” Karl continues.

Satellite images of Mars’ surface clearly indicate that the Jezero Crater, among other places, contains an abundance of different clay minerals. The scientists believe that these clay materials can be transformed into green bodies – wet, unfired ceramic objects – through the addition of water alone. “These green bodies can then be used to create stable objects for daily use, such as plates, vases and the like as well as clay bricks. Mars’ arid environment means these bricks are more stable than they otherwise would be. We have already been able to successfully demonstrate this in our experiments, where we shaped and produced such objects through 3D printing. Unfired clay bricks have been used in building for centuries by people in especially dry regions of the Earth such as in Shibam, Yemen, where an entire city was built of unfired clay, the tallest buildings rising 30 meters into the air,” says Karl.

Currently, the researchers are working to establish the entire 3D-printing process using these clay minerals under simulated Martian conditions. The first measurements taken by the Perseverance Rover could help them to further optimize the clay composition of their materials. Their ultimate aim is to support scientific research about Mars using this clay-based material system.

Further information can be obtained from:

All news from this category: Architecture and Construction

Towards a novel material culture

How the Building Sector Can Achieve Its Climate Targets After All