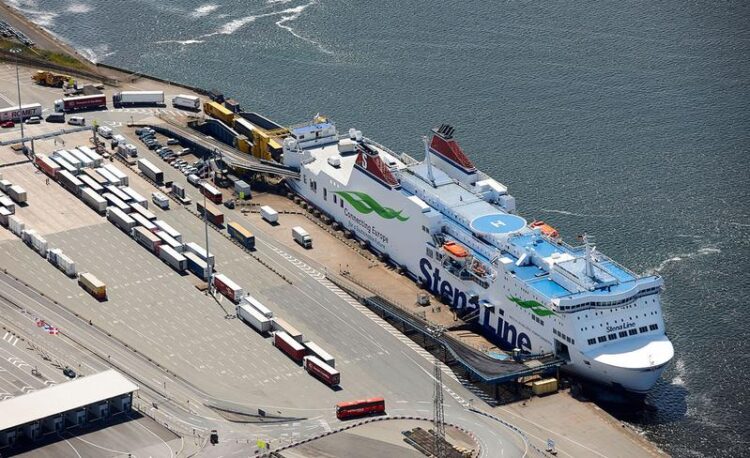 Electric vehicles are booming, with more than a million on German roads as of this year. This, in turn, means that an increasing number of alternative fueled vehicles are transported on ferries. However, there are particular conditions associated with traveling at sea, such as the sea state and closed vehicle decks. This, in combination with the particular characteristics of and risks associated with alternative fueled vehicles, means that shipping companies and ship crews must be prepared for certain challenges. In ALBERO, a research project by the German Federal Ministry of Education and Research (BMBF), a research team from the Fraunhofers FKIE designed an information system.

The German federal government is promoting the switch to electromobility. The proportion of electric vehicles is set to be massively increased by means of innovation bonuses, tax incentives and the expansion of the charging station infrastructure. Currently, the government is aiming to see 15 million electric cars on the roads in Germany by 2030. And the math appears to work out: In 2022, according to the Kraftfahrt-Bundesamt (Federal motor transport authority, KBA), the number of electrically powered passenger cars doubled compared to the previous year.

At the same time, there are ongoing efforts to promote the use of natural gas, liquefied petroleum gas and hydrogen as more environmentally friendly fuels. This means that an increasing number of alternative fueled vehicles will be transported on roll-on/roll-off ferries in the future. Vehicles are often on closed vehicle decks during transportation. This gives rise to new potential risks, as various accidents have already shown: In February 2022, Felicity Ace, a cargo ship, caught fire and sank. There were around 4,000 vehicles on board. These included numerous plug-in hybrids and purely electric-powered cars with built-in lithium-ion batteries, which complicated firefighting efforts. The batteries in an unknown number of electric vehicles had caught fire on board this roll-on/roll-off ship. Back in November 2011, an electrically powered Nissan caught fire on the vehicle deck of the Pearl of Scandinavia ferry. An investigation revealed that the fire broke out while the car was charging. As a result, the shipping company prohibited charging during crossings. Incidents such as these inspired the partner organizations to launch a project looking into ways to improve safety when transporting alternative fueled vehicles. “For some time now, in addition to conventional vehicles, gas-powered and electrically powered vehicles have increasingly had to be transported on roll-on/roll-off ships. This requires new safety procedures on board. The unique conditions on ferries create a particular need for action; these include the cars being parked closely together, which makes them difficult to access, the increased risk of a fire spreading, unpredictable weather conditions, the vibrations of the ship and much more,” says Lerke Thiele, a researcher at Fraunhofer FKIE. That is why she and her colleagues, including Nina Rößler, and the other industry and research partners from the ALBERO project are working to develop systems and technologies to safely integrate alternative fueled vehicles into roll-on/roll-off ferry traffic. “An analysis by a project partner showed that the risk of a fire spreading to the surrounding area is higher with electric cars than with conventional vehicles. And there are more complex risks to the health of emergency personnel and bystanders. If the battery malfunctions and catches fire, it can release toxic gases,” explains Rößler.

A joint project between the Institut für Sicherheitstechnik und Schiffssicherheit e. V. (German Institute for Safe Engineering and Ship Safety), the Bonn-Rhein-Sieg University of Applied Sciences, the Research Institute for Automotive Engineering and Powertrain Systems Stuttgart, GTE Industrieelektronik GmbH and Lloyd’s Register focused on both battery-powered vehicles and alternative fuels such as natural gas (liquid and compressed natural gas), liquefied petroleum gas and hydrogen. In this project, funded by the BMBF as part of its “Civil security – Transport infrastructure” field, researchers developed technical, structural and organizational measures to improve safety when transporting the vehicles and – for electric vehicles – when charging them during the voyage. As well as appropriate methods for pre-sorting during boarding, they designed special parking spaces and loading decks that have innovative risk detection and safety systems. For example, the booking system, pre-sorting process and traffic management system were incorporated into the parking space design. Recommendations were also developed for the placement of vehicles on board, and visual representations of their locations and drive types were created for the crew on the bridge. The plans for detecting and extinguishing fires took into account fire detection systems such as gas sensors, temperature monitors and various firefighting training courses specifically developed for alternative fueled vehicles. The guidelines are supplemented with structural fire protection methods (e.g. partitions, ventilation, explosion protection), recommendations for suitable measures to be taken in the event of an accident and requirements for safe loading, taking into account the particular circumstances on board.

There were countless factors to be considered when creating the designs: How can alternative fueled vehicles be identified if there is no standardized labeling throughout Europe? How can the vehicles’ drive types be identified before the crossing? What unique characteristics do they have? How much power is available? How many charging stations can be installed? What power output can these provide? What type of risk detection system is suited to each drive type? What advantages and disadvantages do the different decks pose in terms of preventive measures and firefighting? “Arranging optimal placement and fire prevention for alternative fueled vehicles is a complicated matter. Our task was to design a boarding process and develop a pre-sorting method at the port considering these variables. On board, relevant information is transferred to the LoMoSS (Load Monitoring Support System) information system for which we developed a protoype. This situation-reporting system also provides support in decision-making; we implemented and evaluated the system using low and high fidelity prototypes. It allows us to visually represent vehicles’ exact parking positions. An important element of LoMoSS is that, after passengers disclose their vehicle’s drive type when booking, this information is recorded in the booking system and linked to the vehicle’s license plate. In the case of immediate danger, it can also identify the owner or cabin number – loading officers explained that this was a particularly important requirement,” explains Lerke Thiele. The researchers took a human-centered approach to designing the user interface; the potential end users were closely involved in this iterative method. “In our trials, the testers (ferry captains and officers) all rated the system highly in terms of usability. That means they were satisfied they could use the system to carry out their assigned tasks in full, with little effort,” says Thiele.

Next, the researchers hope to use LoMoSS to automatically record vehicles’ exact parking positions. An industry partner has already shown interest in developing a module for this purpose.