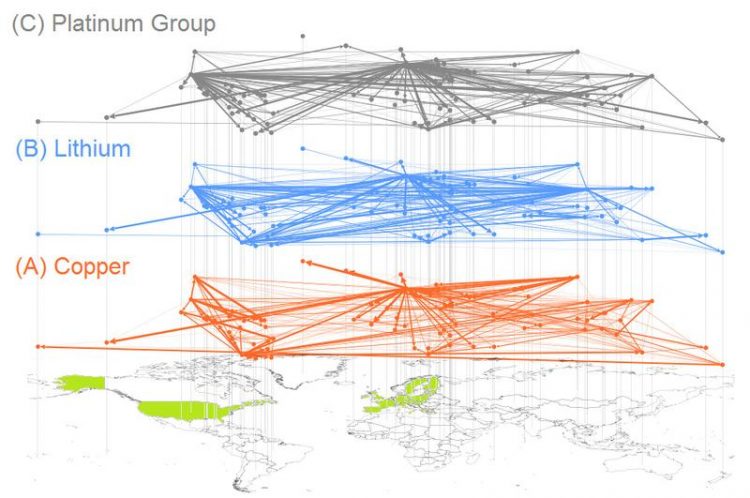 Shortages of natural resources—minerals such as copper, aluminum, and mercury—could lead to cascading shocks and lead to instabilities in the global trade system, according to a study published today in the journal Science Advances.

“Regional shortages of minerals necessary for the manufacture of modern technologies could ripple throughout the trade system, leading to a sharp increase in the price volatility of such minerals in the global markets,” says Peter Klimek, a researcher at the Medical University of Vienna, who led the study in collaboration with IIASA researchers.

The study examined trade flows of 71 mineral commodities between 107 countries, using a new method to assess the systemic risk in commodity trade networks.

It shows that minerals that are produced as a byproducts of other processes—for example rare earth metals produced as a byproduct of phosphorus mining for fertilizer—are the most susceptible to price volatility leading to systemic instabilities, “The beauty of this methodology is that it allows the data to tell its own story,” says IIASA Ecosystems Services and Management Program Director Michael Obersteiner.

The new study grew out of a conversation with IIASA Advanced Systems Analysis researcher Stefan Thurner, who has previously applied similar methods to the study of systemic risk in financial markets.

“Commodity markets, like financial markets, are highly international and interconnected,” explains Thurner. “Understanding these networks gives us a handle to explain and possibly predict a large portion of the instabilities in terms of price volatility in the markets.”

In particular the study finds shortcomings in the management of non-fuel mineral resources that increase the systemic risk, and provides a method for countries to assess their resilience with respect to such rippling network effects. It proposes policy measures, for example a tax based on commodity risk that could create more stable markets.

About IIASA:
The International Institute for Applied Systems Analysis (IIASA) is an international scientific institute that conducts research into the critical issues of global environmental, economic, technological, and social change that we face in the twenty-first century. Our findings provide valuable options to policy makers to shape the future of our changing world. IIASA is independent and funded by scientific institutions in Africa, the Americas, Asia, Oceania, and Europe. www.iiasa.ac.at