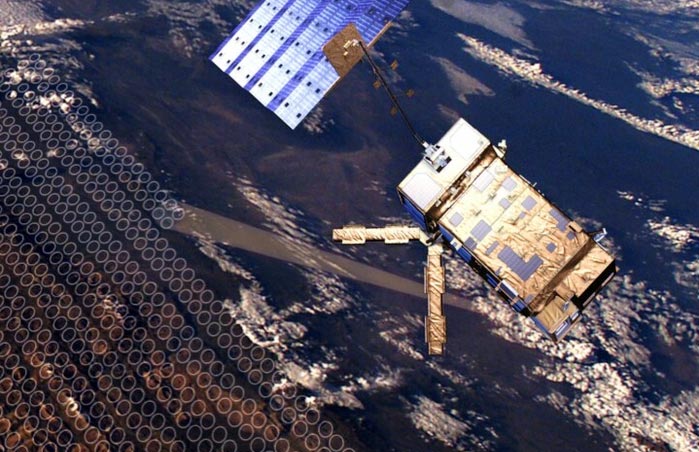 Using Infrared Atmospheric Sounding Interferometer (IASI) data, scientists can estimate how much of the Sun’s radiation is being absorbed by specific gases – like ammonia – in Earth’s atmosphere. From its post aboard ESA’s MetOp satellite, the instrument observes the amount of ammonia in 12 kilometer-wide “columns.” Imagine a drinking straw with a hole roughly the size of Staten Island, extending all the way from Earth’s surface to the top of the atmosphere. With IASI data, scientists can estimate the density of ammonia in each square centimeter, from end to end, of that 12-kilometer-wide straw. That metric is then reported as ammonia vertical column density. In columns where there is more ammonia, the ammonia vertical column density is higher. Because IASI is constantly making these measurements, researchers can identify when vertical column density is higher or lower in certain areas, and then correlate the density with changes in seasons, agricultural activity, and environmental events.
Illustration from ESA - AOES Medialab

A new NASA-led study is the first to document changing atmospheric ammonia (NH3) concentrations in Africa over an extended period. Ammonia is an air pollutant which can lead to heart and lung related illness. When present in excess in an ecosystem, it can make soil more acidic and hinder plant growth.

Ammonia is emitted naturally from soils and vegetation fires, but agricultural activities such as raising livestock and using fertilizer are also major sources. As agriculture scales up to meet the needs of growing populations, it is likely that ammonia emissions will rise too. To create this current view of ammonia emissions, the researchers used satellite data from 2008 to 2018, identifying rises and falls in ammonia concentrations across the continent and the likely causes of those changes.

“We’ve shown here that we can use satellite data to observe trends and monitor emissions of ammonia in specific regions, linked to specific activities or environmental events,” said Enrico Dammers, a scientist at the Netherlands Organization for Applied Scientific Research and co-author of the paper.

By 2050, the global population is expected to reach roughly 10 billion people. Africa’s population is predicted to be as much as 2.5 billion by then –– about double what it is today. In many African countries, governments are promoting fertilizer use to increase food production. In addition, biomass burning (the burning of living or dead vegetation), as a result of human and natural processes, is common in Africa, where about 70% of the global annual area of burned land occurs. These factors made Africa an important place to study ammonia emissions, according to principal investigator Jonathan Hickman, a research scientist at Columbia University and NASA’s Goddard Institute for Space Studies in New York City.

“These results are important to keep in mind as the world experiences a growing population and huge challenges with food security,” Hickman said. “Understanding how human-made and natural ammonia emission sources are changing is important for ensuring policies and technologies that promote sustainable agricultural development.”

Hickman and his team used satellite data observed by the European Space Agency’s Infrared Atmospheric Sounding Interferometer (IASI). The instrument covers the entire planet at a resolution of about 7.5 by 7.5 miles (or 12 by 12 kilometers), which allows scientists to observe specific areas of interest.

Their study was published today in the journal Atmospheric Chemistry and Physics.

As Africa expands its agricultural processes, Hickman said, it will see higher concentrations of atmospheric ammonia. Similar trends have already played out across the globe. Ammonia emissions in Africa are less studied than they are in the United States, Europe and China, Hickman added.

“Satellite analyses can help start to bridge the monitoring gap, providing early analyses of how changes in agriculture and other sources of ammonia are affecting the atmosphere,” Hickman said. He hopes to continue observing ammonia concentrations across the continent into the future, to see how these trends change with time. “These studies emphasize the need for agriculture to scale up sustainably.”