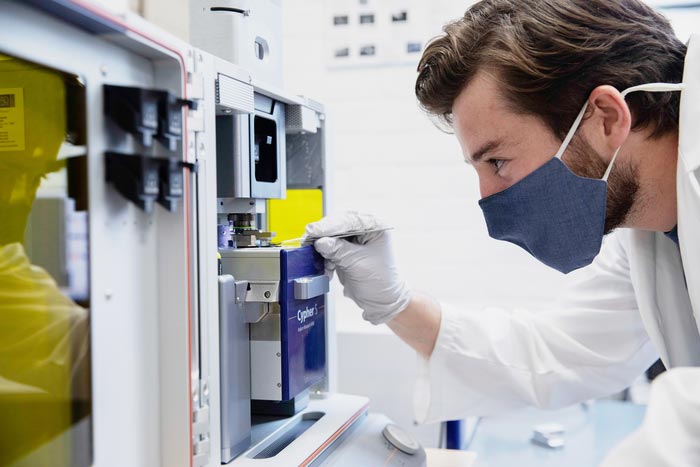 PhD candidate Peter Serles places a sample of magnetene in the atomic force microscope. New measurements and simulations of this material show that its low-friction behaviour is due to quantum effects.
Credit: Daria Perevezentsev / University of Toronto Engineering

Magnetene could have useful applications as a lubricant in implantable devices or other micro-electro-mechanical systems.

A team of researchers from University of Toronto Engineering and Rice University have reported the first measurements of the ultra-low-friction behaviour of a material known as magnetene. The results point the way toward strategies for designing similar low-friction materials for use in a variety of fields, including tiny, implantable devices.

Magnetene is a 2D material, meaning it is composed of a single layer of atoms. In this respect, it is similar to graphene, a material that has been studied intensively for its unusual properties — including ultra-low friction — since its discovery in 2004.

“Most 2D materials are formed as flat sheets,” says PhD candidate Peter Serles, who is the lead author of the new paper published today in Science Advances.

“The theory was that these sheets of graphene exhibit low friction behaviour because they are only very weakly bonded, and slide past each other really easily. You can imagine it like fanning out a deck of playing cards: it doesn’t take much effort to spread the deck out because the friction between the cards is really low.”

The team, which includes Professors Tobin Filleter and Chandra Veer Singh, Post-Doc Shwetank Yadav, and several current and graduated students from their lab groups, wanted to test this theory by comparing graphene to other 2D materials.

While graphene is made of carbon, magnetene is made from magnetite, a form of iron oxide, which normally exists as a 3D lattice. The team’s collaborators at Rice University treated 3D magnetite using high-frequency sound waves to carefully separate a layer consisting of only a few sheets of 2D magnetene.

The University of Toronto Engineering team then put the magnetene sheets into an atomic force microscope. In this device, a sharp-tipped probe is dragged over the top of the magnetene sheet to measure the friction. The process is comparable to how the stylus of a record player gets dragged across the surface of a vinyl record.

“The bonds between the layers of magnetene are a lot stronger than they would be between a stack of graphene sheets,” says Serles. “They don’t slide past each other. What surprised us was the friction between the tip of the probe and the uppermost slice of magnetene: it was just as low as it is in graphene.”

Until now, scientists had attributed the low friction of graphene and other 2D materials to the theory that the sheets can slide because they are only bonded by weak forces known as Van der Waals forces. But the low-friction behaviour of magnetene, which doesn’t exhibit these forces due to its structure, suggests that something else is going on.

“When you go from a 3D material to a 2D material, a lot of unusual things start to happen due to the effects of quantum physics,” says Serles. “Depending on what angle you cut the slice, it can be very smooth or very rough. The atoms are no longer as restricted in that third dimension, so they can vibrate in different ways. And the electron structure changes too. We found that all of these together affect the friction.”

The team confirmed the role of these quantum phenomena by comparing their experimental results to those predicted by computer simulations. Yadav and Singh constructed mathematical models based on Density Functional Theory to simulate the behaviour of the probe tip sliding over the 2D material. The models that incorporated the quantum effects were the best predictors of the experimental observations.

Serles says that the practical upshot of the team’s findings is that they offer new information for scientists and engineers who wish to intentionally design ultra-low-friction materials. Such substances might be useful as lubricants in various small-scale applications, including implantable devices.

For example, one could imagine a tiny pump that delivers a controlled amount of a given drug to a certain part of the body. Other kinds of micro-electro-mechanical systems could harvest the energy of a beating heart to power a sensor, or power a tiny robotic manipulator capable of sorting one type of cell from another in a petri dish.

“When you’re dealing with such tiny moving parts, the ratio of surface area to mass is really high,” says Filleter, corresponding author on the new study. “That means things are much more likely to get stuck. What we’ve shown in this work is that it’s precisely because of their tiny scale that these 2D materials have such low friction. These quantum effects wouldn’t apply to larger, 3D materials.”

Serles says that these scale-dependent effects, combined with the fact that iron oxide is non-toxic and inexpensive, makes magnetene very attractive for use in implantable mechanical devices. But he adds that there is more work to be done before the quantum behaviours are fully understood.

“We have tried this with other types of iron-based 2D materials, such as hematene or chromiteen, and we don’t see the same quantum signatures or low friction behaviour,” he says. “So we need to zero in on why these quantum effects are happening, which could help us be more intentional about the design of new kinds of low-friction materials.”