How to modify RNA 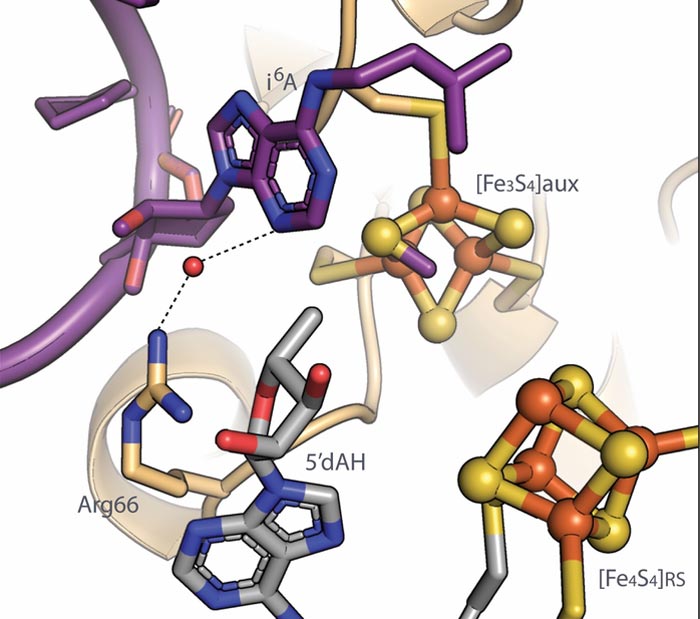 A new study by Penn State researchers has revealed the chemical steps involved in adding an important tag—a methyl sulfur group—to transfer RNA, a process that, if interfered with in humans, can lead to neuronal diseases, diabetes, and cancers.
Credit: Booker Lab, Penn State

The chemical steps in an important cellular modification process that adds a chemical tag to some RNAs have been revealed in a new study. Interfering with this process in humans can lead to neuronal diseases, diabetes, and cancers. A research team, led by chemists at Penn State, has imaged a protein that facilitates this RNA modification in bacteria, allowing the researchers to reconstruct the process. A paper describing the modification process appears Sept. 15 in the journal Nature.

Transfer RNAs (tRNA) are the RNAs that “read” the genetic code and translate it into a sequence of amino acids to make a protein. The addition of a chemical tag — a methyl sulfur group — to a particular location on some tRNAs improves their ability to translate messenger RNA into proteins. When this modification process — called methylthiolation — doesn’t occur properly, mistakes can be incorporated into the resulting proteins, which in humans can lead to neuronal disease, cancer, and increased risk of developing Type 2 diabetes.

“Methylthiolation is ubiquitous across bacteria, plants, and animals,” said Squire Booker, a biochemist at Penn State and investigator with the Howard Hughes Medical Institute who led the research team. “In this study, we determined the structure of a protein called MiaB to better understand its role in facilitating this important modification process in bacteria.”

Imaging MiaB in action with SAM molecules and tRNA at several points during methylthiolation allowed the researchers to infer the chemical steps during the modification process. First, a molecule of SAM donates its methyl group to the auxiliary iron-sulfur cluster on MiaB.

“The source of the sulfur atom attached to the tRNA has been controversial, but our structures reveal that a methyl group from SAM attaches to a sulfur atom on MiaB’s auxiliary iron-sulfur cluster,” said Olga Esakova, assistant research professor in chemistry at Penn State and first author of the paper. “This methyl group and the sulfur it attaches to on MiaB are ultimately what transfers to the tRNA, but some additional steps occur before the tRNA can accept the methylthio group.”

The addition of an electron fragments a second molecule of SAM into a free radical. The radical ultimately takes a hydrogen atom from the tRNA, which is replaced with the methylthio group on MiaB.

The result of these steps is tRNA with the added methylthio group and a successful modification.

Next, the researchers hope to identify how the auxiliary cluster is rebuilt after each turnover so that the process can proceed for multiple rounds. They are also investigating analogous proteins that play a similar role in the modification process in humans.