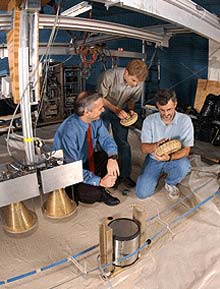 A landmine detection system under development by a team of Georgia Tech researchers uses high-frequency seismic waves to displace soil and objects in it slightly. A non-contact radar sensor then measures the results, creating a visual representation of the displacement that reveals the buried mines. <br>Georgia Tech Photo: Gary Meek <br>

Millions of land mines are buried worldwide, and these weapons were responsible for an estimated 16,000 injuries and deaths in 2002.

Georgia Institute of Technology researchers are making progress with a landmine detection system that could ultimately help prevent such losses. The system uses high-frequency seismic waves to displace soil and objects in it slightly (less than one ten-thousandth of an inch). A non-contacting radar sensor then measures the results, creating a visual representation of the displacement that reveals the buried mines.

Yet because plastic mines have very different mechanical properties from soil and ground clutter, the seismic waves are capable of detecting and distinguishing these mines from common ground clutter. This has been demonstrated in laboratory and limited field tests.

“When a wave hits a land mine, resonance builds over the top of the mine, triggering a vibration which is bigger than the wave that excited it – and the vibration persists longer,” says Waymond R. Scott Jr., a professor in Georgia Tech’s School of Electrical and Computer Engineering (ECE) and principal investigator on the project.

Sponsored by the U.S. Office of Naval Research, the U.S. Army Research Office and the U.S. Army Night Vision & Electronic Sensors Systems Directorate, the mine-detection project involves researchers from various departments at Georgia Tech. This multidisciplinary team started work in 1997 with computer modeling and lab experiments. Field testing began in fall 2001, and during the past two years, the researchers have conducted tests at six sites.

In November 2002, the researchers traveled to a government testing facility in a temperate climate where they detected six different anti-tank and anti-personnel mines. “Our results there were comparable to what we saw in the lab, which was very significant. That was a big hurdle for us,” Scott says.

Field tests at government facilities give the researchers greater credibility because conditions are more realistic, and they can compare results to data from other research teams. What’s more, the mines at government test sites have been buried for several years, which complicates detection.

“It’s much easier to detect a mine that’s been buried recently because you’ve disturbed the soil,” says George McCall, a senior research engineer in the Georgia Tech Research Institute’s Electro-Optics, Environment and Materials Laboratory. “After a land mine has been in the ground for a while, the soil becomes weathered and more compact. This makes it harder to find, so it’s a better test for our detection system.”

In February 2003, the researchers traveled to another government testing facility where the ground was frozen. This test broadened the scope of environmental conditions under which the mine detection system had been used.

Testing in a variety of sites is important because different environmental conditions affect how far and how fast seismic waves travel through the earth. That, in turn, affects how waves interact with buried mines and what kind of signal processing is required to image the mines.

The field tests have also given the researchers a chance to develop another aspect of the seismic mine detector — an audio representation of buried mines.

“When the system passes over a mine, you hear a resonance that’s easy to distinguish from the incident signal – it’s a hollow sound like what you hear when you tap on a wall to find a stud,” Scott explains, adding that the operator would listen to this resonance via a headset, or the unit would have a speaker. “In some cases, this audio representation was clearer than the visual representation.”

Because of this discovery, Georgia Tech will collaborate with CyTerra Corp. to evaluate the feasibility of incorporating the Georgia Tech seismic sensor into a handheld mine detector the company is producing for the U.S. Army.

CyTerra’s current handheld system combines a metal detector with ground-penetrating radar. “Integrating the capability that Georgia Tech has developed to acoustically measure vibrations will give us a triple-sensor device that should increase our ability to detect mines and reduce false alarms,” says William Steinway, executive vice president of CyTerra Corp. based in Waltham, Mass.

“No single sensor has proven capable of detecting mines well with acceptable false alarms in all environmental conditions,” Scott says, noting that what works best in a given situation depends on the type of mine and where it’s buried. “A fusion of multiple sensors will most likely be necessary to get good performance in all conditions. Our seismic sensor is ideal to fuse with other types of sensors like GPRs and metal detectors.”

In June 2003, researchers conducted their eighth field test, traveling to Skidaway Island, Ga. This was the team’s third visit to Skidaway, and data derived from this field test was consistent with earlier measurements — an encouraging result.

Even more important, researchers were able to test techniques for making the mine-detection system faster:

“The positioner we used was never intended to do this, so with different hardware we should be able to get better results,” says James S. Martin, a senior research engineer from Georgia Tech’s School of Mechanical Engineering. “Even so, this was much better than the snail’s pace at which we had been working.”

Two radar sensors have been used in the current system to demonstrate that interactions between multiple sensors are not problematic. But adding more sensors would make the system faster. “Anytime you increase the number of sensors you’re using, you can decrease the measurement time,” says Gregg Larson, another School of Mechanical Engineering researcher on the project.

Bottom line, researchers say the time required to measure a square meter can be sliced from several hours to less than a minute. Faster measurements are crucial as the team develops a prototype for more extensive field tests.

“Testing in different soil properties is important because the soil’s complicated structure makes it to difficult to detect mines. You can’t just look up the soil parameters we need in a book,” he adds.