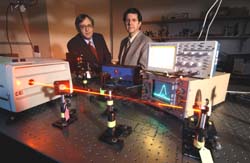 Georgia Institute of Technology Professors Seth Marder (left) and Joe Perry pose with laser equipment they use to write complex 3D structures in polymers and other materials. <br>

A three-dimensional microfabrication technique that uses a unique class of light-activated molecules to selectively initiate chemical reactions within polymers and other materials could provide an efficient way to produce complex structures with sub-micron features.

Georgia Institute of Technology Researchers Seth Marder and Joseph Perry will describe the technique February 15 at the annual meeting of the American Association for the Advancement of Science (AAAS).

“We have developed a disruptive platform technology that we believe will provide broad new capabilities,” said Marder, a professor in Georgia Tech’s School of Chemistry and Biochemistry. “We believe this technique provides a real competitive advantage for making complicated three-dimensional microstructures.”

The technique uses a family of organic dye molecules known as Bis-donor phenylene vinylenes that have a special ability to absorb two photons of light simultaneously. Once excited, the molecules transfer an electron to form a simple acid or a radical group that can initiate a chemical reaction — such as polymer cross-linking or ion reduction.

By adding small concentrations (0.1 percent) of the molecules to a resin slab containing cross-linkable acrylate monomer, for example, researchers can use a focused near-infrared laser beam to draw patterns and initiate cross-linking reactions only in material exposed to the light. The reactions can make that portion of the slab insoluble, allowing the remainder to be washed away to leave a complex three-dimensional structure.

The researchers have demonstrated the ability to create both positive and negative resists using two-photon activated reactions to alternatively create soluble or insoluble 3D patterns. Beyond polymers, Perry and Marder have demonstrated the fabrication of tiny silver wires from patterns written in materials containing silver nanoparticles and ions.

The molecules developed by Marder and Perry are hundreds of times more efficient at absorbing two photons than previous photoactive materials. That efficiency allows them to write 3D patterns in polymer slabs that are typically 100 microns thick, at light intensities low enough to avoid damaging the materials.

The laser writing process takes advantage of the fact that the chemical reaction occurs only where molecules have absorbed two photons. Since the rate of two-photon absorption drops off rapidly with distance from the laser’s focal point, only molecules at the focal point receive enough light to absorb two photons.

“We can define with a very high degree of precision in the x, y and z coordinates where we are getting excitation,” Marder explained. “Using 700-nanometer light, the patterning precision can be about 200 nm across by 800 nm in depth.”

By scanning the laser in the sample while turning the laser off and on, Perry’s group has created a variety of structures, including objects with moving parts like gears and chains. Three-dimensional structures produced by the technique could be used as molds or templates for mass-producing other structures through simple stamping processes. The technique could also be used to create textured surfaces on which tissues can be grown, or optical elements such as photonic band-gap structures used to manipulate light.

For producing 3D microstructures, the simple two-photon technique could compete with complex multi-step fabrication processes that use lithography, etching and layering technologies borrowed from the microelectronics industry. However, the two-photon technique can produce only one structure at a time, while the microelectronics-based processes simultaneously generate hundreds or thousands of identical structures.

“We are working to integrate the technologies and develop a system that should be able to operate at a thousand times the throughput of the current system,” he said. “A single 3D fabrication system should be able to generate about a million individual device structures per day. With a production facility using a number of fabrication systems, there is potential for certain types of mass production.”

The researchers envision tabletop fabrication machines that would use a computer-generated design system to laser write the desired structures. A cartridge containing the polymer film would then be removed for chemical development.

To move their technologies into the commercial world, Marder and Perry have helped form a company known as Focal Point Microsystems. The firm has licensed the technologies, which were developed when the scientists worked at the California Institute of Technology and the University of Arizona before joining Georgia Tech last summer.

In collaboration with researchers at Arizona and Cornell, Marder and Perry have also been examining the fluorescent properties of the materials for possible applications in biological imaging. The molecules also have properties that are of interest for photodynamic therapy, which would use light to destroy cancer cells.

For the future, Marder and Perry hope to continue improving their dyes, increasing the resolution of the laser writing process, expanding their family of materials – and better understanding the process. “The scientific challenges are getting things smaller, writing faster and increasing the number of materials in which you can write,” Perry said.

###
The research has been supported by the National Science Foundation, National Institutes of Health, the Air Force Office of Scientific Research, Office of Naval Research and Defense Advanced Research Projects Agency.