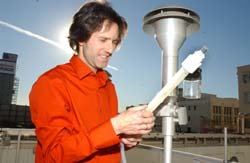 New technologies developed by University of Southern California engineers to measure the toxic properties of ultrafine particles in air pollution are helping scientists understand the connection between smog and cardio-respiratory disease.

“We are just beginning to realize that these microscopic specks of dust and soot are far more toxic in the human body than larger, coarser particles,” said Constantinos Sioutas, deputy director and co-principal investigator of USC’s Southern California Particle Center and Supersite.

“They aren’t trapped by the nose and trachea, but travel all the way down to the tiniest branches of the lungs and enter the bloodstream through the alveoli, which are very thin-walled sacs of spongy tissue at the ends of the bronchioles,” said Sioutas, an associate professor of civil and environmental engineering in the USC School of Engineering.

More residents than ever are falling prey to microscopic soot less than 1/100th the diameter of a human hair. These particles, known as “particulate matter” or PM, lodge deep inside the lungs, where they are rapidly absorbed into the bloodstream or remain embedded for long periods of time.

Particle smog has been blamed for a 17-percent increase in premature deaths from heart and lung disease, according to recent studies by Harvard University and the National Institutes of Health, among others.

Nationwide, this invisible soot – which is less than 2.5 microns in diameter – has been linked to roughly 60,000 smog-related deaths in the United States each year.

In 2000, the Environmental Protection Agency responded to the paucity of information about particulate matter by establishing the Southern California Particle Center and Supersite, the nation’s largest research center focused on understanding the health effects of exposure to airborne particulate matter.

With an $18 million grant, the center brought together interdisciplinary faculty from five institutions in Southern California – USC, UCLA, Caltech, UC Irvine and UC Riverside – to measure the physico-chemical characteristics of air pollutants and identify the properties that can aggravate such health problems as chronic asthma, bronchitis, emphysema and other respiratory, as well as cardiovascular, diseases.

Particulate matter usually contains a combination of fine solids such as dirt, soil dust, pollens, molds, ashes and soot, along with even finer aerosols that are formed in the atmosphere from gaseous combustion byproducts, such as volatile organic compounds, sulfur dioxide and nitrogen oxides, Sioutas said.

Invisible, for the most part, these particles “snow” on people from a wide range of sources, such as factory and utility smokestacks, vehicle exhaust, wood burning, mining, construction activity and agriculture, he said.

Sioutas’ interest in the field began in graduate school at Harvard, where he built his first particle concentrators. He currently holds nine patents on concentrators that can separate the tiniest particles of pollution from the majority of the surrounding gases so that the particles may be studied.

These monitors are able to identify pollutants in discrete size groups: ultrafine particles of less than 0.1 micrometers, such as those generated by combustion; fine particles, ranging in diameter from 0.1-2.5 micrometers, such as ammonium sulfate and nitrate compounds, which produce eye-stinging photochemical smog; and coarse, dusty particles larger than 2.5 microns that contain mostly soil and sea salt elements.

The concentrators have been introduced in a host of institutes and agencies – including the EPA, the USC and UCLA medical schools, Harvard Medical School and the National Institutes of Health in the Netherlands and Canada – to help scientists identify the physical and chemical properties of microscopic pollution.

Sioutas has monitored concentrations of toxic particulate matter in the vicinity of interstates 110, 710 and the 405, which slices north-south through the Los Angeles basin. Home to 15 million individuals and 10 million vehicles, the L.A. basin relies on the 405 alone to funnel nearly 100,000 vehicles through the region every day.

“It may sound a little odd, since we live in one of the smog capitals of the country, but the lack of conclusive information to link ambient vehicular air pollution to cardio-respiratory disease is a critical gap in our work,” said Sioutas, a member of the Air Quality Advisory Committee on Particulate Matter for the State of California.

“Automobiles spew millions of tons of this noxious soot into the air every day, but a lot of it is far smaller than anything we have ever been able to measure in the past.”

With a team of researchers from USC’s department of civil and environmental engineering, as well as from UCLA’s School of Public Health, Sioutas made detailed measurements showing that gasoline emissions constituted about 90 percent of all vehicular emissions along the 405 and 110 freeways.

But along Interstate 710, 80 percent of the particle pollution came from diesel engines, which some researchers consider to be more toxic than gasoline emissions.

The smallest particles, Sioutas stressed, were the most toxic.

“They’re the easiest to inhale,” he said. “They can flow all the way down into the alveoli and coat that spongy moist lung tissue, which is then rapidly absorbed in the bloodstream.”

The findings have raised serious concerns about the adequacy of current national air quality standards for particulate matter.

In spring 2003, the EPA was prompted to initiate a new review of particulate matter standards. The review has not been concluded yet, but the board is considering a proposal to impose stricter regulations nationwide on particle mass [size] and chemical composition.