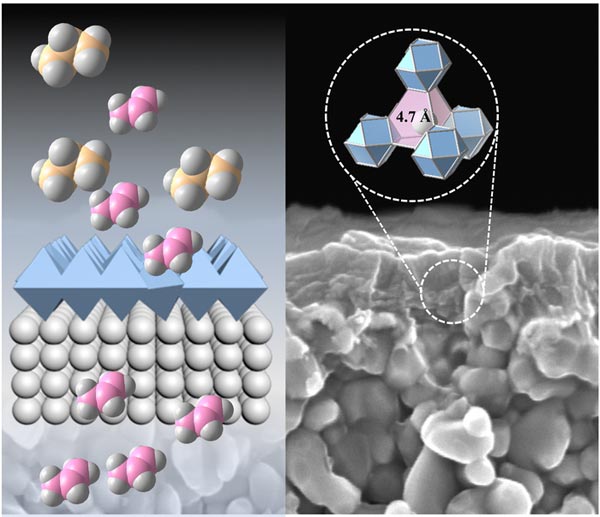 An electrochemical approach developed at KAUST produces molecular-sieving membranes that could enable a cheap energy-efficient separation of light hydrocarbons, such as olefins and paraffins. This separation, critical for the petrochemical industry, usually relies on extremely energy-intensive processes, such as distillation.

Membrane-based strategies have emerged as promising alternatives to heat-driven separation approaches. Existing polymer-based membranes are not selective enough for hydrocarbon separation and also undergo plasticization, a structural change that alters their pores, at high pressure. On the other hand, highly porous crystalline materials, called face-centered cubic metal-organic frameworks (MOFs), exhibit modular pores with precisely tunable triangular apertures.  This means they can be modified to separate light hydrocarbon mixtures. Moreover, the selected MOFs are impervious to plasticization.

Conventional MOF manufacturing methods, such as solvothermal synthesis, involve reacting organic linkers of appropriate length and bulk with a metal source to yield an extended crystalline solid with desired pore geometry. However, these methods require relatively high temperatures, high pressures and long reaction times, which are not easy to scale up.

“Our approach enables the synthesis of continuous MOF films at room temperature and ambient pressure in a short time,” says Mohamed Eddaoudi, who led the study.

The researchers chose preassembled rare-earth and zirconium hexanuclear clusters as building blocks, which reacted with linkers capable of deprotonation on demand to form tiny interconnected crystallites with exposed triangular windows.

Instead of using a base, the electrochemical approach uses external electrons to deprotonate the linkers, which makes it adaptable and easier to control by adjusting the current density and linker concentration. “The protonated linkers are first added and then deprotonated in a controlled manner for immediate consumption, affording the desired crystalline materials,” says Ph.D. student Sheng Zhou.

The team, explained senior research scientist Osama Shekhah, chose their MOF platform for its proven chemical stability. “If we translate this MOF series into continuous membranes, it will fully meet the industrial requirements and desired robustness under practical industrial extreme conditions,” he adds. “The remaining challenge is to scale up these membranes to the requisite industrial scale.”

The team collaborated with KAUST catalysis scientists to perform simulations that suggested that the zirconium-based membranes can substantially save energy and utility costs if implemented in hybrid membrane–distillation systems producing high-purity propylene.

The team is now trying to scale up the manufacturing process to generate more compact membrane modules and assess their performance under industrial conditions.